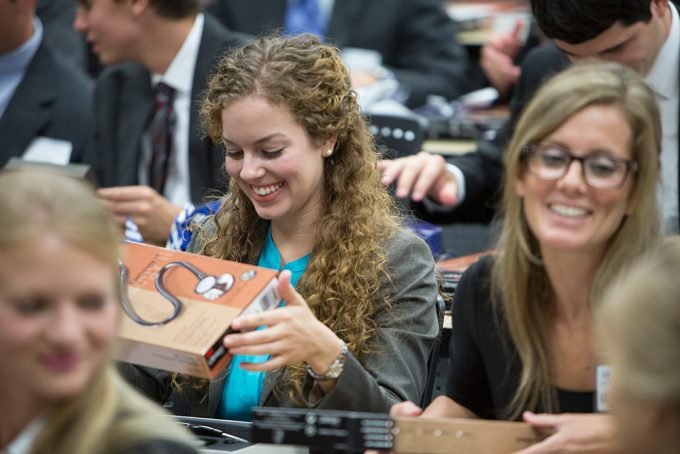 Gasps filled the lecture hall as 135 first-year students filed in to find rectangular boxes on the tables in front of their seats. Beneath the dark blue wrapping paper, the new doctors-in-training found a tool to mark the beginning of their medical education journey.

One by one the students draped the 3M Littmann Cardiology III stethoscopes around their necks and flashed grins as they snapped photos to capture the moment.

“The English language doesn’t allow me to articulate,” said 25-year-old Adam Koby, after receiving his stethoscope. “It’s a symbol that this is real.”

These gifts, presented to the UF College of Medicine class of 2018 during freshman orientation in July, were made possible by Noel Maun, MD ‘95, PhD ’95, and his wife, Erica, a graduate of the UF College of Health and Human Performance.

Maun received three degrees from UF, but his connection to the university began long before college. As children, he and his siblings spent countless afternoons playing and doing homework on campus at the student infirmary where their mother practiced medicine for more than 30 years. All four children attended UF, and Maun and his sister, Angeli Maun Akey, MD ’93, followed their mother’s example and became physicians.

Maun and his wife decided to fund the new stethoscopes to show appreciation to their alma mater and to express their happiness and excitement for the class of 2018.

“The gift is a symbol of the gratitude we have for the University of Florida — including the College of Medicine — for everything they’ve given us with our education and the opportunities that have become available to us because of our education,” said Maun, a medical oncologist/hematologist in Venice, Florida.

He said the stethoscope, the most prominent tool doctors use to provide health care, symbolizes the connection between physician and patient.