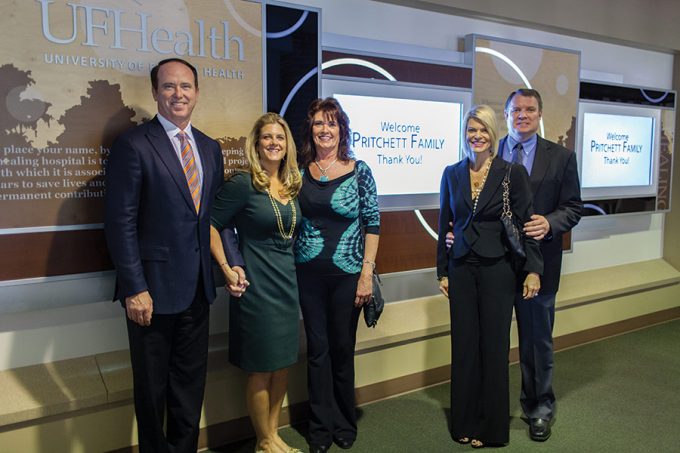 The Pritchett family of Gainesville and Lake Butler, Florida, announced in October a $1 million donation in memory of Marvin H. Pritchett to the Sebastian Ferrero Foundation for the construction and advancement of UF Health Shands Children’s Hospital.

“This gift will support our expansion efforts and will help UF Health realize its shared vision of pairing the best facilities with the best people to deliver the best possible care to children,” said David S. Guzick, MD, PhD, senior vice president for health affairs and president of UF Health.

“Tonight, in the spirit of always living for today and never forgetting those who came before us, our family is honoring our father’s virtue and giving back,” said Jon Pritchett.

A native of North Florida, Marvin Pritchett was a devoted family man, respected businessman, philanthropist, civic volunteer and a proud alumnus of UF. One of his greatest joys in life was to be able to give back to his community.

“Our father was energized by his work with young people, and he would be so impressed with the Sebastian Ferrero Foundation and excited with the progress of the UF Health Shands Children’s Hospital,” said Jon Pritchett, president and chief executive officer of Nextran Corp. and Pritchett Trucking. “We are proud to continue his legacy of giving back and helping to make a lasting difference for children for decades to come.”

Ongoing renovations at UF Health Shands Children’s Hospital include the new pediatric emergency room that opened in 2011, the recent expansion of the pediatric cardiac intensive care unit, the expansion of the neonatal intensive care unit, and a new entrance with a multi-story glass pavilion and separate lobby space, slated for completion this summer.

Founding chair of the College of Medicine department of microbiology and the college’s second dean passes away.
By Styliana Resvanis