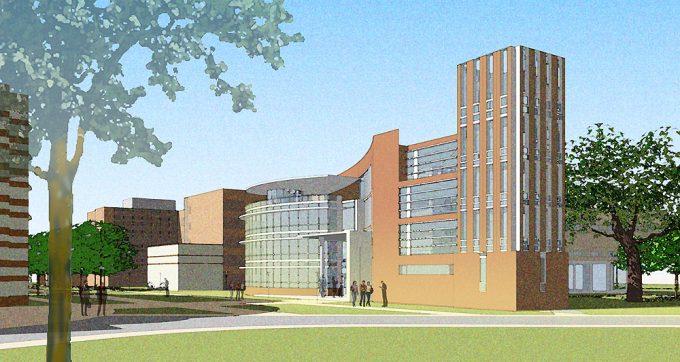 Dr. H. James “Jim” Free was sitting on the stage during the College of Medicine’s 2010 commencement ceremony at the Phillips Center for the Performing Arts. He and a handful of his classmates from the college’s first class of medical students served as honorary marshals for the graduation exactly 50 years after their own. They watched as 130 newly conferred MDs took the Hippocratic Oath and formally stepped into their new role as physicians.As he watched from the stage, one thing struck him that day that he couldn’t get out of his mind for months.

“I was surprised by how few of the graduates had chosen to go into one of the primary care specialties,” said Free, a retired physician from Clearwater who practiced internal medicine for 35 years. “I thought about that for a long time after.”

Free and his wife, Carole, now a retired nurse who is just as passionate about patient care, have often thought about the state of primary care medicine at the state and national level. As active volunteers in local hospitals in their home town of Clearwater, they understand all too well the challenges faced by primary care physicians. 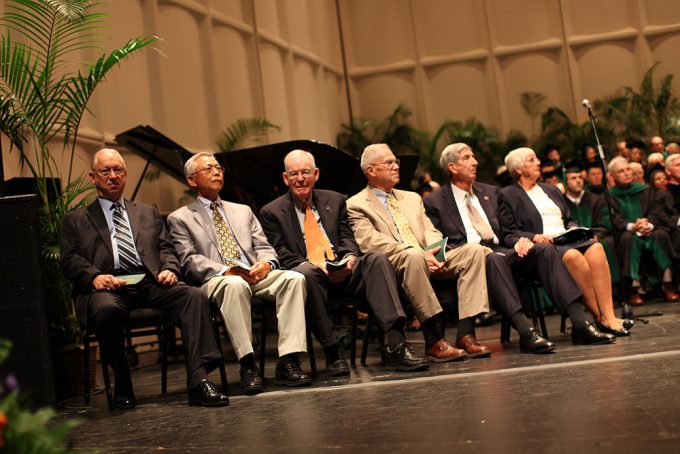 H. James Free, MD ’60, sitting second from the right, and five of his classmates from the College of Medicine’s first class, served as honorary marshals for the college’s 50th commencement ceremony held in May 2010. The members of the class of 1960 led the procession into the ceremony and sat onstage to help celebrate 50 years of UF medical graduates.

The observation made during graduation 18 months ago blossomed with the Frees, resulting in a significant gift to help establish the H. James Free, MD Center for Primary Care Education and Innovation and further the university’s plan to build a new medical education.

“Today is a historical day for the College of Medicine,” said Dean Michael L. Good, MD, to a crowd of faculty, staff and students who gathered at the college courtyard Nov. 16 for the announcement. “With this transformational gift, we take a giant step toward elevating medical education, not just in Florida but the entire country.

“The Frees have demonstrated great faith in the University of Florida and in the College of Medicine,” he said.

In addition to creating a center that will strengthen primary care training and research at UF, the Frees’ gift will initiate the College of Medicine’s education building project, and Jim and Carole have requested that the new facility be named in honor of George T. Harrell, MD, the college’s founding dean who passed away in 1999.

“Dr. Harrell was an innovator who had foresight into medical education,” Free said. “He brought his ideas to the frontline of the UF medical center.”

Harrell handpicked all 47 members of the college’s inaugural class, and they remember their dean fondly today.

“He was ahead of his time and very creative,” said Jean Bennett, MD ’60, a retired pediatrician who remained close to the founding dean.

Harrell first came to UF as a consultant during the early stages of planning for the new Health Science Center. Hired by UF President J. Hillis Miller in 1953, Harrell meticulously plotted everything in the new medical school, from how high the windows should be to what students should learn. Harrell’s vision and idealism inspired the faculty he hired and spilled over into the foundation of the college he was creating.

“Dr. Harrell was a legendary trendsetter in medical education who instilled in his students an unwavering focus on the patient’s well-being,” Good said. “Dr. Free’s long and successful medical career reflects the values and ideals that Dr. Harrell modeled for his students.” Harrell advocated training students in small groups to prepare them to work effectively as part of multidisciplinary health care teams, and he emphasized the humanities, behavioral sciences and family medicine — key concepts of the College of Medicine’s newly revised curriculum for which the new building is needed.

“We are at a critical juncture in our history,” said Good. “Our future depends both on providing access to advanced technologies and simulation and on drawing from ideas of our past, such as small group learning spaces, effective student-to-faculty ratios, blended classroom environments and private study areas.

“A new medical education building that accommodates these adjustments in the curriculum will complete our Health Science Center campus and realize the vision that was conceived more than 50 years ago.”

A renewed focus on primary care

Of the 130 students from UF’s medical class of 2010, eight graduates went into family medicine, 18 into internal medicine and 11 into pediatrics. That number stayed consistent for the following year’s class and with the national average. The problem, say health care experts, is it won’t be enough.

The number of U.S. medical school students going into primary care has dropped about 50 percent since 1997, according to the American Academy of Family Physicians. The U.S. health care system has about 100,000 family physicians and will need 139,531 in 10 years. The AAFP predicts a shortage of 40,000 family physicians in 2020, when the demand is expected to spike, and the current environment is attracting only half the number needed to meet the demand.

“Carole and I focused on what UF could do to encourage more students to go into primary care,” Free explained. “We wanted this center established because changes to the health care system in this country will require more primary care physicians.”

Longer days, lower pay and less prestige have turned doctors away from family medicine, a specialty many believe to be the precursor for wellness and preventive-care programs that can help reduce health care costs.

At the heart of the rising demands on primary care physicians are the underserved populations, for whom family physicians provide the majority of care — those who live in America’s rural and urban areas as well as the 78 million Baby Boomers born from 1946 to 1964 who began to turn 65 in 2011.

“Carole and I focused on what UF could do to encourage more students to go into primary care.”

Robert Hatch, MD, a UF professor of community health and family medicine, said the creation of the primary care center will allow UF to make important strides both for the state and the nation.

UF has assembled a team to guide the effort and establish the Free Center for Primary Care Education and Innovation. Its primary care champions include faculty who shape and deliver both the medical curriculum and experiential learning opportunities for students interested in practicing primary care and who have expertise in research. The work will begin with undergraduates and conclude with the development of new residency programs.

“Dr. Free has given us two gifts: the financial gift to create the center and establish a building but also the gift of his example,” said Hatch. “He is passionate about primary care and has done an outstanding job at taking care of his patients over the years. The reason is that he values spending time with his patients and he values the connection with his patients.

“We are going to make sure that this center demonstrates for our students how important that is and demonstrates how rewarding medicine is when you attend to those things.”

Building for the future 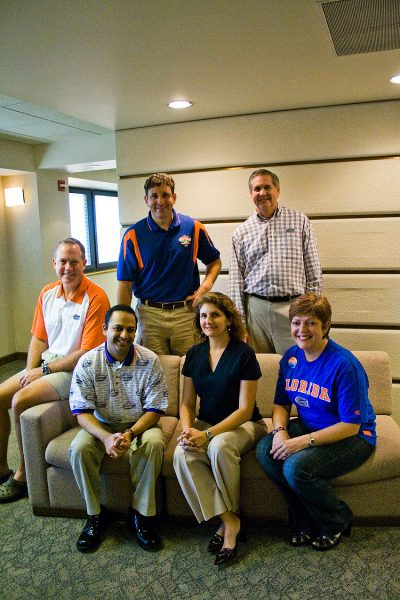 Six members of the UF medical alumni board are pictured here during their spring 2008 meeting. Several alumni board members were the first to accept the College of Medicine’s Alumni Challenge, which supports the construction of a new medical education building. Today, the Alumni Challenge includes 26 members. From left are James B. Duke, MD ’85; Sunil Josh, MD ’98; Gina Sivigney, MD ’94; and Rosie Fortunato, MD ’84. Standing from left are Jason Rosenberg, MD ’95 and Mark Adkins, MD ’82.

It was during the fall 2008 medical alumni board of directors meeting when several board members stood up and accepted the Alumni Challenge brought forth by Jason Rosenberg, MD ’95, and Sunil Joshi, MD ’98, to support the university’s plan to build a new medical education facility on the Health Science Center campus. The goal of the challenge is to enlist 100 College of Medicine graduates to pledge at least $5,000 a year over five years for the new building fund.

“It’s crucial that we raise the seed money needed to get this important project off the ground,” Rosenberg said at the meeting.

With funding efforts being led by the Alumni Challenge campaign, leadership within the Health Science Center and the College of Medicine galvanized its plans for a new, state-of-the-art building.

In July 2009, David S. Guzick, MD, PhD, senior vice president for health affairs and president of the UF&Shands Health System, launched a systemwide strategic planning process that included each health center dean, each center and institute director and hospital leadership from both Gainesville and Jacksonville. Eight months later, after concentrated planning, a strategic plan was in place, which included a new curriculum for the medical school that took advantage of the changing environment in health care and in education technology.

Good was named permanent dean of the medical school in December 2009 and Joseph Fantone, MD, was hired to take over medical education as the senior associate dean of educational affairs in April 2010.

“Everything started to come together,” Guzick said. “A new curriculum was evolving focusing on small group learning that is translated to humanistic, team-based care for patients.

“The next step is to build a facility that aligns with the new curriculum, so we can prepare our students for the future,” said Guzick. “This contribution from the Frees is an enormous stride toward this goal. I am truly inspired by the generosity, the vision and the loyalty that Jim and Carole demonstrate by making such a transformational gift.”

The new medical education building is a $40- to $45-million project, of which half must be raised through philanthropic support, college leaders say.

“We will continue to reach out to our fellow alumni because gifts of all size will make a difference,” said Rosenberg, UF medical alumni board president. “We all want to be proud of our school’s facilities and proud of where UF medical students are learning.”

According to the plan, the new building will be located across from the McKnight Brain Institute on Newell Drive and next to the Health Professions, Nursing and Pharmacy Building, creating a pedestrian quadrangle for students, faculty and staff and completing the Health Science Center campus, Guzick explained. The building also will incorporate a small tower at the south end that mirrors Century Tower up the hill on the main UF campus.

“The tower will provide a gateway to the Health Science Center campus,” Guzick explained. “The College of Medicine has never had a ‘front door,’ and this building will complete the vision for the entire academic health center.”