Over the last four decades, Donnie Batie, MD ’79, has spent his days, nights and weekends fighting heart disease and hypertension among his patients in Baton Rouge, Louisiana. But these days, his biggest foes are the deer, raccoons and squirrels that try to steal the vegetables he plants in his garden.

Batie is taking a well-deserved rest after devoting his career to helping families and older adults achieve their best health outcomes as a family medicine physician and geriatrician. Batie, who retired last summer after months of helping his patients navigate the COVID-19 pandemic, says he aimed to provide more than medical advice to his patients — he became a member of their community, an extended member of their families.

“When I moved to Baton Rouge after medical school, I decided to bloom where I was planted and became involved with the community,” he says. “I’ve taken care of four or five generations of one family. I’ve seen patients age — I’ve had a couple of patients reach over 100 years old, and their wisdom is amazing.”

When he attended the University of Florida as an undergraduate student, a series of jobs at the UF College of Medicine convinced Batie of his acumen for medicine. He learned how to start IVs and intubate while he prepared dogs for surgery, and he got his first taste of medical research while shadowing a pediatric nephrologist. The UF College of Medicine rewarded his hard work with an early acceptance into medical training.

“I was blessed to get into medical school after completing my junior year of college,” Batie says. “There is the biblical passage, ‘To whom much is given, much is required.’ I am extremely thankful to be a Gator.”

After receiving his medical degree, Batie traveled to Baton Rouge to complete a residency in family medicine at Earl K. Long Memorial Hospital. He then spent a decade in solo private practice before becoming the associate director of community affairs for the Baton Rouge General Medical Center Family Medicine Residency Program. Here, he taught residents the gentle yet firm truthfulness and grace necessary to deliver some of the toughest news patients will ever hear: a terminal diagnosis of cancer or Alzheimer’s disease.

“A patient and I would go over what’s going to happen long term, so there are no real surprises and their concerns are met,” Batie says. “Everyone has numbered days, so we have to make sure those days are quality.”

Batie is a firm believer in a physician’s responsibility to serve as a patient advocate, especially when it comes to the population he devoted himself to in eastern Baton Rouge, where nearly a quarter of residents live below the poverty line. Though he is no longer pulling seven-day work weeks from sunrise to midnight, he remains active in his retirement as the president of the Louisiana Independent Physician Association and a board member of The Physicians Accountable Care Organization, a multistate organization that works with Medicare to improve medical care.

Batie with his wife of 39 years, Veris. Photo by Daymon Gardner

He says his retirement allows him to strike a much-needed balance between continuing his life’s work — ensuring patients receive quality health care — and spending time with his wife of 39 years, Veris, and their children, Krystal and Theron.

“Pretty much everything I’ve set out to do for myself and my career, I’ve been able to do,” he says. “My life has been right on track.”

In the course of his lifetime, Batie, 67, has witnessed medicine advance by leaps and bounds, but some things — much like his love for the Florida Gators and Gainesville — will always remain the same.

“To a certain extent, medicine has changed, but the passion for helping families and the ability to communicate with them during emotionally taxing times are always part of being a physician,” he says. 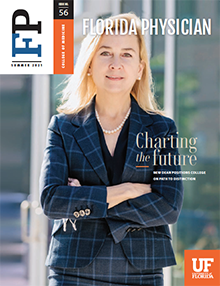