From the laboratory front lines

When news outlets in January reported that a novel coronavirus was causing an outbreak of illnesses and a handful of deaths in China, most of us paid little attention. However, those very familiar with the science took notice. Virologists and microbiologists like Christopher Broder, PhD ’89, and Maria Elena Bottazzi, PhD ’95, not only noticed, but they also reached into their past to resume work that could have an impact on what rapidly became an unprecedented pandemic.

Broder, a professor and chair of microbiology and immunology at the Uniformed Services University of the Health Sciences in Bethesda, Maryland, knows quite a bit about bat-borne viruses. He led a group of scientists that developed a vaccine to protect against the Nipah and Hendra viruses, which cause serious disease outbreaks in humans and livestock, with mortality rates as high as 70%. Both are believed to be spread by flying foxes, also known as fruit bats.

In January, Broder abruptly shifted focus in his lab to develop a test that will simultaneously detect antibodies to the new virus, SARS-CoV-2, as well as other relevant coronaviruses.

“Screening tens of thousands of people will help us understand what percentage of people got infected with SARS-CoV-2 but didn’t come down with the disease, COVID-19. In those cases, they can still shed the virus and may be one of the reasons it’s able to spread,” Broder says.

Bottazzi and her team at the Texas Children’s Center for Vaccine Development at Baylor College of Medicine in Houston reached into their freezer for a vaccine they developed 10 years ago that could potentially offer cross-protection from the new virus sooner rather than later.

The vaccine was initially developed to target the coronavirus that caused the SARS outbreak in China between 2002 and 2003 that killed more than 700 people. That virus shares 80% genetic similarity to SARS-CoV-2, which causes COVID-19. Bottazzi and her team shelved their work on the vaccine due to lack of interest and funding.

Bottazzi, an associate dean at the Baylor College of Medicine’s National School of Tropical Medicine, says the vaccine her team created a decade ago is being used to accelerate the development of a SARS-CoV-2 vaccine, a treatment that aims to be affordable, safe and effective for people across the globe.

“We are ahead of the curve,” she says, adding that her team’s parallel approach of using the repurposed SARS vaccine to create a COVID-19 specific vaccine will aid in understanding how to create universal coronavirus vaccines in the future. “In this case, it’s worth investigating both vaccines because both viruses use the same receptor to enter human cells.”

In Norfolk, Virginia, Navy Capt. Kimberly Toone, MD, a 1997 graduate of the UF College of Medicine, activated sailors aboard aircraft carriers in the Atlantic to produce thousands of face coverings using a blueprint created at her alma mater. Toone, who recently was assigned executive officer of USNS Comfort T-AH 20, learned through social media that faculty in UF’s department of anesthesiology had come up with an innovative mask-making project at the same time the U.S. Navy was looking for ways to protect sailors aboard ships from the spread of the fast-moving virus.

“This highlights the connection between my medical school family and my Navy family at a time when it is so important for all of us to work together,” Toone says. “As a physician it’s difficult not to be doing direct patient care. However, assisting the sailors in the production of these masks allows me to help the sailors stay safe while they conduct their duties.”

Telemedicine through a caring lens

For Sunil Joshi, MD ’98, most of his patients are over age 65 and suffer with asthma or other immunodeficiencies. As he shifted his practice to predominantly telehealth appointments, Joshi, president of Family Allergy Asthma Consultants in Jacksonville, Florida, made sure he retained the humanistic side of medicine even though it was practiced through the cold delivery of technology.

“This is where the art of medicine comes into play,” Joshi says. “I spend a little more time at the end of our visits asking how they’re getting through this. I think it’s helpful to hear from a physician that you’re not the only one suffering and that we’re getting to the end of this whole thing sooner rather than later.”

If you have a story to share about battling the COVID-19 pandemic in your community, please email drgator@health.ufl.edu. 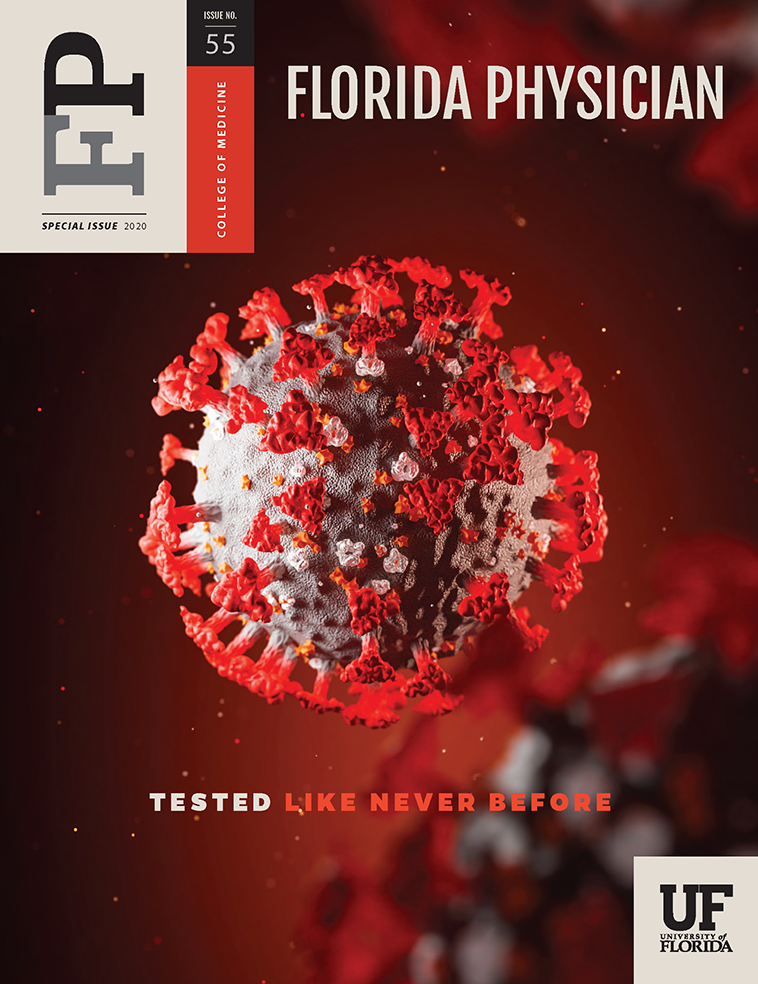