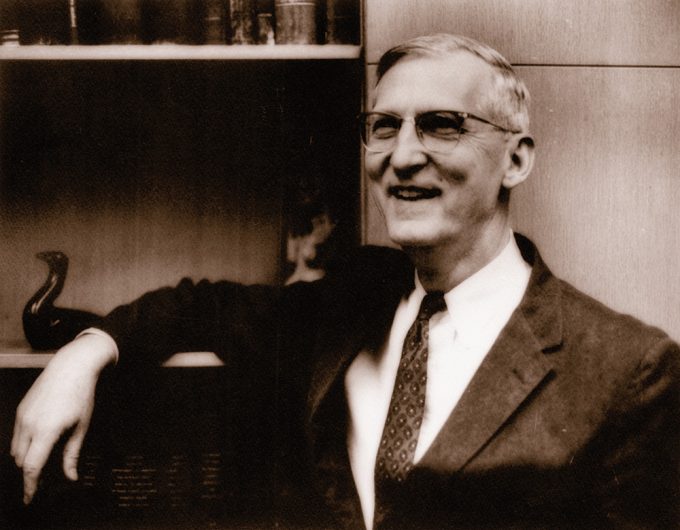 Members of the UF College of Medicine class of 1961 showed support for the new Medical Education Building through a gift to name the clinical skills director suite after the college’s founding dean, Dr. George T. Harrell. Photo courtesy of UF Digital Collections

In honor of the college’s history, alumni from the class of 1961 raised more than $55,000 to name the clinical skills director office in the new George T. Harrell, MD, Medical Education Building after the college’s founding dean.

“He (Harrell) was the originator of all of our hopes and dreams in terms of starting the medical school,” said Carl Trygstad, MD ’61, who partnered with former classmate Stuart Kleit, MD ’61, to spearhead the gift. “He was a great teacher and a great human being.”

Trygstad, of Del Mar, California, is vice president and chief medical officer for SFJ Pharmaceuticals Inc. He hopes the gift from his class serves to help medical students not only learn about technology but also about how to interact with and examine patients using basic techniques such as the “look-listen-feel” method.

Early faculty members of the UF College of Medicine taught students that to serve patients to the best of their abilities, they would need to view graduation as the beginning of a lifelong process of education rather than an end, said Kleit, of Wellington, Florida, who taught at the Indiana University School of Medicine for 35 years before retiring in 1998.

“Medicine has changed,” he said, “but one thing hasn’t changed, and that is that the most important person you’re ever going to deal with is the patient.”