Three doctors’ hands were inside Brett Parks’ open stomach, trying to use pressure to stop the bleeding. Still, the bleeding wouldn’t stop. A bullet had pierced his intestines and traveled downward, destroying several inches of his inferior vena cava, the body’s largest vein.

Fortunately, James Dennis, MD, is not only a trauma surgeon, but also UF Health Jacksonville’s chief of vascular surgery. He activated a massive transfusion protocol, which directs the hospital’s blood bank to send coolers of blood to the operating room every 15 minutes. The doctors finally cut through the iliac artery that covers the hard-to-reach vena cava, tying the artery and pushing it out of the way. It halted blood flow to Parks’ right leg but at last gave them the access they needed to stop the bleeding.

Parks, a personal trainer, never expected to face death the night he went to an apartment complex to meet a client in October 2012. But he had to act when he heard screams for help. He chased down a mugger and caught him. Then he was shot. Lying on the ground, Brett, who’s also a U.S. Navy air crewman, thought he would die without meeting his unborn daughter. His wife, Susan, was seven months pregnant, and they had a 17-month-old son, Jason. 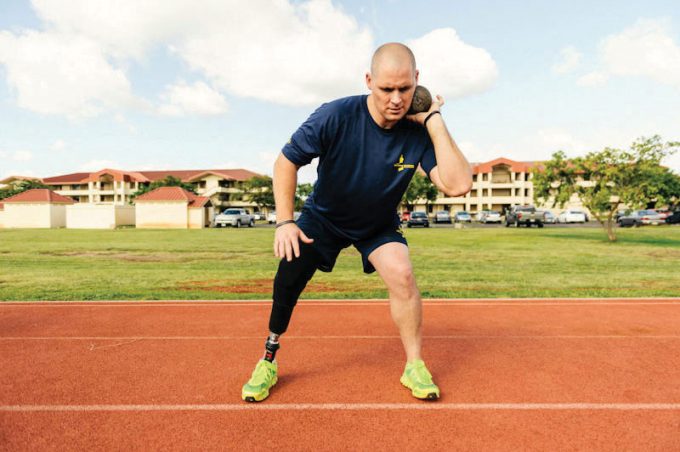 Brett Parks competes in the shot put event at the Wounded Warrior Pacific Invitational in Hawaii.

Fortunately, a UF Health medical resident heard the gunshot and cared for Parks while they waited for the ambulance to arrive. He was taken to UF Health Jacksonville, North Florida’s only adult and pediatric Level 1 trauma center.

Kept in a medical coma for weeks, Parks returned to surgery more than a dozen times, losing a kidney and part of his colon. The muscles in his lower leg died, stressing his remaining kidney. Susan was told amputating would be his best shot at survival.

“You do whatever you need to do to keep him alive,” she told doctors.

Orthopedic surgeon Hud Berrey, MD, has 35 years of experience, including war-zone amputations and eight years in charge of the Walter Reed National Military Medical Center Amputee Clinic. Parks’ below-the-knee amputation would make a world of difference in his mobility.

When Parks woke from the coma, he refused to be called a hero. To him, the more than 370 UF Health employees who played a role in saving his life were the heroes. To thank them, he vowed to appreciate his second chance. He started Second Shot Ministry to tell his story as a motivational speaker.

“I feel like God has had his hands in this from the very beginning,” he said.

After surgeries and rehab and physical therapy, Parks finally went home in early 2013. His daughter, Stella, was born in December 2012. Susan said she’s proud of her husband’s attitude and can’t wait to see what he does next.

DM at UF celebrates its 20th anniversary by raising a record-crushing $1.5 million.
By Christine Boatwright