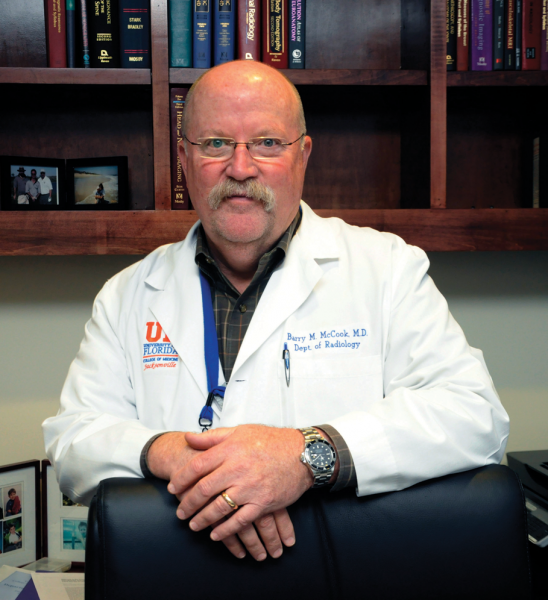 Growing up in Jacksonville, Barry M. McCook, MD ’84, had his plan all laid out.He was going to be a doctor.

But when he arrived at Florida State University, his plans changed. McCook moved back home and went to nursing school, with the ultimate goal of becoming a nurse anesthetist. A portion of his training, in the mid-1970s, was performed at what’s now UF Health Jacksonville. McCook, an operating room nurse, even spent some time working for his mother Eva, head nurse in the recovery room at St. Vincent’s Medical Center.

“She was one of the toughest bosses of my career so far,” McCook said.

Yet the pull of his lifelong dream remained.

“I didn’t want to go through life and say ‘I always wanted to be a doctor, and I wish I would’ve tried,’” McCook said.

So McCook left nursing and went back to FSU to finish his undergraduate work and then went to medical school at the UF College of Medicine, graduating in 1984. He planned to go into obstetrics and gynecology but promised his brother Thomas, a radiologist, that he wouldn’t choose a specialty until he did a rotation in radiology.

During his radiology rotation, he worked with the late Irvin “Dick” Hawkins, MD, and McCook was hooked.

“Dr. Hawkins was one of the most motivating forces in my career,” he said.

McCook then went on to complete a residency in radiology and a fellowship in nuclear medicine, both at Vanderbilt University.

After nine years in private practice and 10 years at the University of Pittsburgh, he moved back to Jacksonville to take a job as chief of the division of molecular and functional imaging and director of the diagnostic radiology residency program at the UF College of Medicine-Jacksonville.

Now back in his hometown, he is an associate professor and chair of the department of radiology and putting his own money toward building a new resident education conference room. McCook made a second donation this month to the fund he named in honor of H. Martin Northup, MD, a longtime champion of resident education and patient care in the department.

“If I named it the Barry McCook Fund, we probably wouldn’t get much money,” he joked. “Everybody knows Dr. Northup.”

McCook said the project is almost ready to go, thanks to contributions from alumni and others. To help push it over the top, McCook also has pledged to personally match any donations that come in through the end of the year.

The department holds two conferences a day for the 20 residents in the four-year program. Most of the teaching is done with digital images, so the latest technology is critical.

“You have to have an area that is conducive to learning,” McCook said.

He said he’s fascinated by the ever-changing technology in the field and helping teach the next generation of radiologists. The mix of science and patient care is a perfect fit for him, McCook says.

Yet he still looks back at his experiences as a nurse and says those days shaped his career as much as anything.

“I try to understand things from everyone’s perspective in the hospital, and having been a nurse and working in that role helps me look at things a little differently than someone who went straight to medical school.”