As UF’s first-and second-year medical students blaze a trail for the College of Medicine’s newly designed curriculum, they draw on traditions, and indeed support, from the school’s past.

Dr. Richard T. Smith, the first chair of pediatrics at the UF College of Medicine who distinguished himself through his pursuit of excellence in all things, links the college’s past with its future by establishing an endowment that will acknowledge and support academically exceptional students.

Through their gift of $1.2 million to create the Smith Family Scholarship, Smith, and his wife, Jean Smith, have established a legacy at the College of Medicine that will influence UF medical students for generations.

The scholarship, the College of Medicine’s largest merit-based scholarship endowment, will be awarded annually to a rising third-year medical student beginning this year. The honor will last in perpetuity and reward students who meet specific criteria set by a faculty committee.

Smith, whose research has contributed widely to what is known about many diseases and conditions, treated countless numbers of critically ill children in his lifetime — including the first patient admitted to Shands Hospital in 1958.

“We are indebted to Dr. and Mrs. Smith for all they have done for the College of Medicine over the years and for what they continue to do for the future of our students.”

— Michael L. Good, MD, dean of the College of Medicine

He is a professor emeritus of pathology, immunology and laboratory medicine at UF. Throughout his long career at UF, Smith held many leadership positions. In addition to serving as the first chair of pediatrics, he was chair of the department of pathology from 1967 to 1985. He also served as the first vice president of advancement and executive vice president of the UF Foundation and as the first senior associate dean for research in the College of Medicine. He retired from research in the fields of immunobiology and tumor biology in 2003. 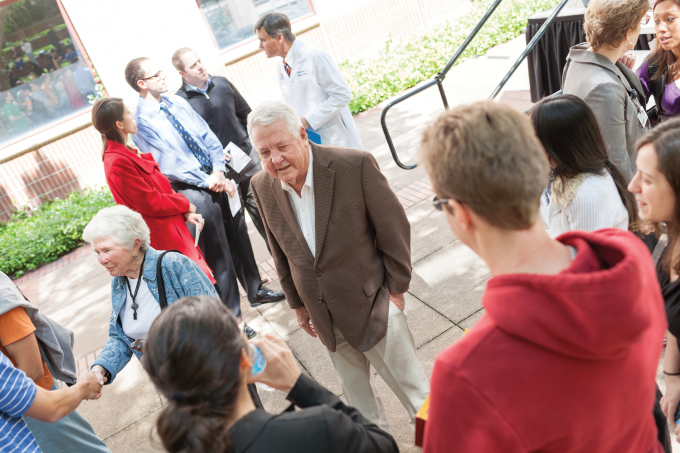 The College of Medicine held a special program March 29 announcing the Smith Family Scholarship, where Dr. Richard Smith and his wife, Jean, gathered with students and faculty. Photo by Jesse S. Jones

“From as early as his days as a medical student at Tulane University School of Medicine and as a scholarship recipient himself, Dr. Smith has been a champion of excellence in all things, which makes this award for our medical students so meaningful,” said Michael L. Good, MD, dean of the College of Medicine. “We are indebted to Dr. and Mrs. Smith for all they are doing for our future.”

Richard and Jean Smith moved to Gainesville Labor Day weekend, 1958 because they were attracted to the challenge of starting a new medical college.

“Those of us who came down in the beginning were not building on anything except a dream,” Smith says.

Through the decades the Smiths received several tempting offers to join other institutions, but the couple’s life became deeply rooted in Gainesville.

“When we see what has been accomplished at the college and at the Health Science Center, we feel enormous pride and feel it was a life well-spent,” said Richard Smith. “We are glad to leave something that will have an impact and help a student follow their passion without the burden of overwhelming debt.”

New program is designed to put UF medical students on a path toward leadership and innovation.
By Melanie Stawicki Azam