When Dr. Michael Gilmore recalls his days playing Gator football, he remembers the tough workouts and grueling practices in the steaming humidity where he and teammates would push it to the limit under the fierce eyes of then-UF Coach Steve Spurrier.

Most weekdays, around 5:30 or 6 p.m., Gilmore, a 1999 graduate of the College of Medicine, would do some serious sprinting. Not just on the field, mind you, but across the UF campus where he would arrive at his chemistry lab, some days wearing the football pants and pads he’d donned for the day’s practice.

“They locked you out if you were late,” said Gilmore, who wasn’t late very often.

His hustle on the field and in the classroom paid off in 1993, when Gilmore earned not only an undergraduate degree, but also was honored as a first-team Academic All-American. The classroom standout, who majored in microbiology, was also Florida’s lone finalist for the coveted Rhodes Scholarship that year.

Looking back, the juggle of playing in an elite football program and being a top scholar was tough. “Most of those classes, you had to make A’s and it was not without a lot of stress,” Gilmore recalled.

But the competition and on-the-field lessons have paved the way for his success and that of other Division 1 athletes who became doctors after graduating from the UF College of Medicine. The spirit cultivated through elite athletic programs continues to inspire their work years after their dreams of service were first sparked on the UF campus.

Gilmore, a native of Chipley, now lives in Sandestin with wife, Laura, a 1998 graduate from the College of Medicine’s physician assistant master’s program, and his two children, daughter, Madison, 10, and son, Grant, 5. He praises his time at UF because it taught him perseverance, a trait he still leans on in his busy offices.

“Dealing with pressure and stress early in my life helped get me ready to deal with the stress of being on the frontlines of a private practice — whether I knew it then or not,” says Gilmore, who completed his residency at UF in 2004 and is an orthopaedic surgeon in the Florida Panhandle.

Some surgical cases are trying, forcing him, as a doctor, to dig in and see them through. But that fortitude was learned at UF, where excellence and high expectations were microchipped in recruits by the Gator faithful.  The struggle to be a Gator great, he adds, made him strong.

“There were many times on the field when you were trying to be a winner and win championships, and things weren’t going the team’s way. Well, there are a great deal of things in life that may or may not go your way,” he says. “One of the things I learned was how to persevere and not make excuses.”

Gilmore, who still works out with a trainer three days a week to stay in top physical shape, says Spurrier’s devotion to peak conditioning — and some trying workouts in the Gator weight room — helped toughen him up, not only physically but mentally as well.

“Orthopedic surgery takes a lot of stamina — to stand in the operating room all day doing what amounts to manual labor,” he says. “It certainly is difficult on your body.”

But he loves his work, knowing that he can make the difference in someone’s quality of life, whether it’s mobility in a young pitcher’s arm or helping a senior retain his or her physical independence.

“I just try to concentrate on being as good as I can be,” he says. “I try to give them the best care and knowledge I have.” 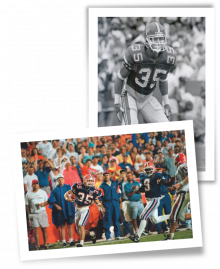 It’s a funny comparison, but Dr. Stacey Stevens Schmiedecke is not without a sense of humor, even as she puts in 13-hour days on the job at the Naval Medical Center San Diego’s Balboa Hospital, where she is an intern and first-year resident.

For two years, Schmiedecke, a Gainesville native and Buchholz High School standout, set pitching records as a UF softball star. And now she’s catching — as in babies — training to become an OB-GYN surgeon for the U.S. Navy after her 2012 graduation from the College of Medicine.

Her profession, caring for expectant mothers and delivering babies, she says with a laugh, “chose me.”

“Everyone asked me the first year (of med school) what I wanted to do, and the only thing I said I didn’t want was to be an OB-GYN,” said Schmiedecke, 28.

Within a couple weeks into her rotation, however, she was hooked. “I think delivering babies is the most rewarding thing in the world.”

The Navy took away her worries of how to fund her medical education. But it was her time playing softball that laid the foundation for the drive and focus it takes to succeed as a physician.

While she set records in 2004 and 2005 on the mound, playing with her twin sister, Shelley, she knew fully that her success as an athlete was due in no small part to the players on the field around her.

“When Shelley (a UF College of Pharmacy grad) and I first started at UF, we quickly realized you don’t pick your teammates. You have been selected to be a part of a bigger process,” she said. “In medicine it’s really important to have that understanding that this is not all about you but the team you are involved in — from pharmacists to nurses to technicians.

“The most important part of that team is the patient,” she continued. “You have the mentality that you are doing something bigger than yourself. That is why medicine feels like such a natural process for me and for a lot of athletes.” Stevens explained that as an obstetrician, it is important to be patient — like a pitcher.

“You are taking care of women who have been pregnant for nine months. You are trying to plan out their delivery,” she said. “I use those athletic skills even more each day. For sure, they overlap.” Dr. Eric Castaldo knew he was destined to be a doctor at 19 — when he witnessed an ER trauma team at work.

The son of a gynecological oncologist, Castaldo, now 38, was working a part-time job in the emergency room at Orlando Regional Medical Center when a young man about his age was airlifted to the hospital and fighting to keep the only leg he had left. The teen’s other leg had to be amputated on site when he fell into some farm equipment.

It was intense, chaotic, focused. And Castaldo got the bug.

“I just remember seeing that scene and how everyone was working together to try to save this kid’s life,” he recalled. “I wanted to be a part of that team. It was that sort of single, defining event.”

Already, Castaldo had the determination needed for the long haul of medical school. After walking on as a catcher at UF after graduating from Orlando’s Lake Brantley High School, Castaldo saw limited time behind the plate until his senior year, when he’d worked his way up to the starting rotation. His team that year went on to play in the College World Series, and his coach, Andy Lopez, told the Orlando Sentinel that Castaldo was the team’s most valuable player.

Now a general surgeon working in a Gainesville practice group, Castaldo, a father of two boys, Casey, 8, and Cale, 6, with wife, Miki, says baseball has helped him be the best he can be in the operating room. 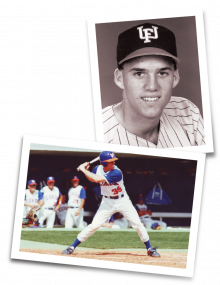 “There is no question that medicine has that team mentality,” says Castaldo, who graduated from medical school at UF In 2002 and completed his surgical residency at Vanderbilt University in 2009.

“The teamwork — it’s very similar to sports. Surgery can’t be won by yourself. You’re really a part of a group of folks as you operate.”

Want to hear more about Castaldo’s time on the Gators baseball team and in medical school? Check out a video of his return to the dugout. Dr. Joe Camps played only one season for Bobby Bowden, but the legendary football coach remembers his hard-working team captain.

“He was a real good, tough football player,” Bowden said. “The kind you like to have on your team.”

Camps, who grew up in Gainesville and attended Gainesville High School, played free safety for Florida State University from 1973-76, earning team captain status and the Bob Crenshaw Award for the player with the “fightingest heart” during his senior year, which was Bowden’s first season at FSU.

Despite his success on the football field, Camps remained focused on his primary goal.

“I was in school to get an education,” said Camps, who graduated from the College of Medicine in 1982. “At 2:30 when practice was over, most guys would go eat or just hang out. I would go to the library. It became my best friend.”

Camps credits football with teaching him about discipline as well as mental and physical toughness.

“If you’re going to be competitive, you better learn how to pull yourself up when you’re down,” he said. “If you apply these traits to everything involved with your life, then it’s easy to be dedicated and successful.”

That philosophy explains why Camps says the proudest moment of his FSU career comes from a loss. The Seminoles were playing defending national champions Alabama Crimson Tide in 1974, and for four quarters, the FSU defense kept Alabama out of the end zone. They lost in the final minutes 8 -7, having given up two field goals and one safety.

“That was a highlight of my career,” Camps recalled. “I remember coming off the field and (Coach Paul) Bear Bryant was complimenting us on how we played. Don’t get me wrong, I wanted to win that game more than anything, but if you do the right things and you are relentless enough, you can find victory in defeat.”

That is a lesson Camps carries with him today as a urologic oncologist in Tallahassee who often must deal with the most difficult defeat of all.

“As physicians, we must understand that we are involved with our patient’s life and well- being when they are most vulnerable,” Camps said. “I take pride in earning my patients’ trust and in trying to transition that fear to hope. Even when it’s bad news, I can help.”

Camps, a graduate of the FSU Program in Medical Sciences, completed his residency at the University of North Carolina at Chapel Hill and a fellowship at M.D. Anderson Cancer Center in Texas. He and his wife, Marion, have three children, Joseph III, Jasmine and Jonathan.

After his education, he returned to the Florida Panhandle, where he practices with the Southeastern Urological Center. The eight-physician group includes six satellite clinics and serves one of the state’s most medically underserved regions.

“Serving an area that lacked adequate medical care was important to me,” Camps said. “Even if I wasn’t always welcomed with open arms at the beginning — it wasn’t so fashionable 23 years ago for a black man to go into a Southern rural community to deliver
health care.

“But people began to see through my color and see me for who I am,” he continued. “I walk into counties around Tallahassee with my team, and we are embraced. You really can transform people’s thinking by who you are.”

And his relationship with his old football coach is stronger than ever. In fact, Bowden turned to Camps to treat his prostate cancer nearly 10 years ago, rejecting suggestions to leave the state for treatment, saying, “No. I trust my captain.” 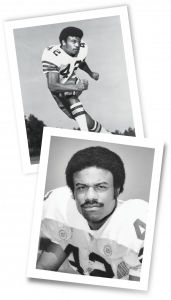 (Karen Dooley contributed to this story.)

The UF College of Medicine has many graduates who have excelled in both sports and medicine, including:

Please share your success in NCAA sports and upload photos of your athletic career with fellow UF medical graduates. Go to facebook.com/ufdrgator.

The tradition of excellence is passed on to future generations of UF medical students.
By Karen Dooley