For the past 40 years, Larry G. Rooks, MD, has made the hour-long trip from his home in Gainesville, heading west down Highway 26 West. 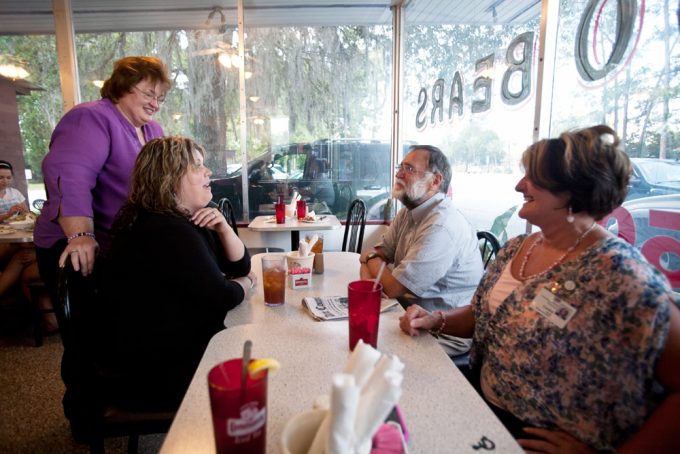 Dr. Larry Rooks and Gredel Buzbee, UF Old Town’s practice manager, chat with local residents — and patients of Rooks — Mariah Owen and Cindy Bellot over lunch at Elaine’s in Cross City. Owen’s mother owns Elaine’s and Bellot is the supervisor of the Dixie County Public Library, where Rooks has played his banjo and sung for children’s programs. Photo by Maria Belen Farias

“I always call it the Siberia of the system,” says Rooks, director of UF’s Rural Health program. “We’re kind of the country cousin out here.”

But it is where the UF COM Class of 1979 alumnus and family practitioner feels at home.

Over the years, Rooks, 65, has removed fishhooks from just about every part of the anatomy, tended to rattlesnake bites and seen plenty of logging injuries. But that’s not why he stays.

“The diseases are interesting, but it’s the relationships with people that make you want to do this year after year,” he says.

Since 1982, Rooks has worked at UF’s rural clinic, which originally was located in nearby Cross City and then Fanning Springs. It draws patients from a roughly 50-mile range that includes Dixie, Gilchrist and Levy counties.

When Rooks first began, UF’s rural practice often felt like a trauma center. The area lacked paramedics, so emergency medical technicians were limited in what care they could give. They would burst into the office with critical patients to stabilize or transport by helicopter to Shands at UF in Gainesville.

“They’d come to our clinic and use it as an ER,” says Rooks. “So you’d have a sore throat, then a cardiac arrest, a cold, then a gunshot wound to the chest.”

Paramedics were introduced to the county in the 1990s, and now they can typically stabilize the patient for the hour-long ride to Shands at UF.

Many of Rooks’ patients are middle-aged or elderly, dealing with chronic conditions like diabetes, high blood pressure and heart problems. They want a familiar face managing their health, someone who knows them and their family, and sticks around for future appointments.

“They like someone to keep any eye on the big picture,” he says, as he munches on a handful of peanuts in his office.

With playful blue eyes behind wire-rimmed glasses, Rooks is constantly joking. But the one time he grows serious is when he talks about access to health care. He thinks everyone should have it, regardless of wealth or where they live.

And besides Rooks and the staff at the UF Old Town clinic, primary care is scarce is Dixie County, which has a population of about 16,000 people. The only other major health care provider in the county is the health department, which offers prenatal and pediatric services. Most specialists and the nearest full service hospital are an hour’s drive away in Gainesville. 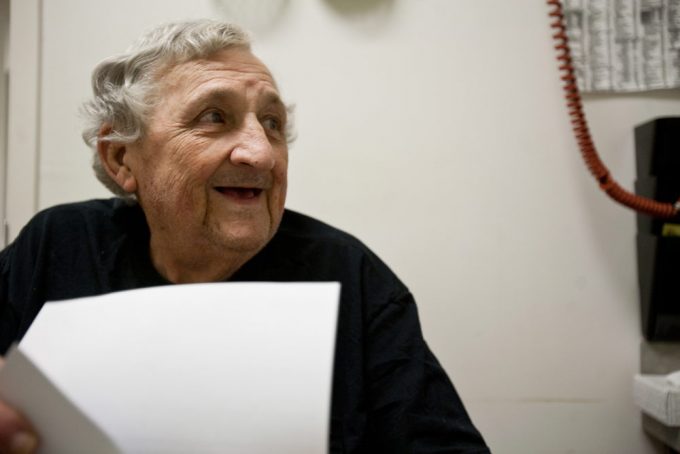 Maurice Brown, 79, has been traveling to Shands for rehab, after the recent amputation of his leg. After rolling his wheelchair into the exam room, he talks to Rooks about how the wound from his amputated leg is healing, then he discusses his latest woodworking project.

“I’m still looking at those woodworking books you got me, but everything I’m building looks like a box,“ Rooks tells Brown.

Another one of Rooks’ longtime patients, Victoria Free, is known around the office as “the peanut lady.” Wearing her Tim Tebow jersey, she arrives for her appointment, carrying plenty of her famous peanuts, bottled in pickled okra jars.

The great-grandmother lives on 11 acres along the Suwanee River and has been Rooks’ patient for several years.

“This is somebody that you come in and she always makes you smile,” says Rooks. “So it’s good therapy for me also.”

Born in Gainesville, Rooks did a rural rotation as a UF College of Medicine student and found his niche.

“My dream was to open the Rooks Clinic and bait shop,” says the avid fisherman.

After his family medicine residency at UF, he accepted a position at UF’s rural clinic and has remained the backbone of the college’s rural medicine program. 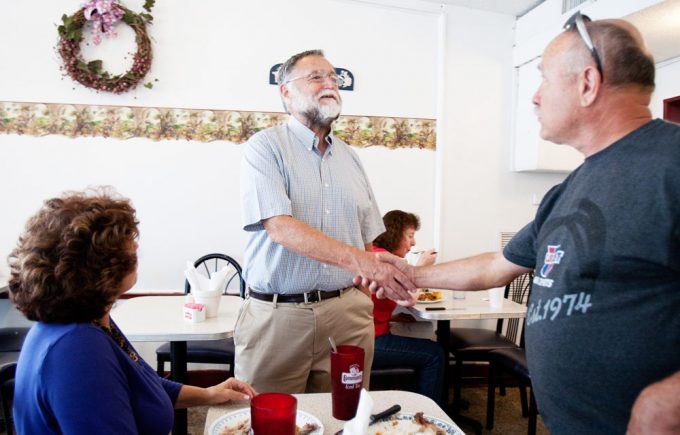 Dr. Larry Rooks greets local residents Jarrett and Helen Liles at a local restaurant. Jarrett was an EMT for Dixie County about 20 years ago. Close-knit Dixie County has one high school and locals say everyone knows everyone. Photo by Maria Belen Farias

“It’s not everybody who will go out to the boondocks and make it home,” says Rooks with a grin. “It depends how much you like swamp cabbage and mud bogging or stuff like that.”

Robert Hatch, MD, UF’s director of medical education in the department of community health and family medicine, has worked with Rooks for 20 years in the rural clinic and calls him “the epitome of rural medicine … taking care of everything from sting ray stings to stabbings to colds.”

But being a rural physician has its challenges. First, there are fewer resources and the isolation from the larger health care community. Lab results often take longer to come back and physicians have to depend more on their individual clinical skills and judgment.

Yet, Rooks’ genuine affection for his patients and his connection to the community is obvious.

Climbing into his old minivan with 270,000 miles and a CB radio, Rooks drives around the area, pointing out its few landmarks — like the county’s sole high school, where he taught a personal hygiene course for a class of special needs students, and the local library, where he has played the banjo and sang a frog song for children’s programs.

When asked about the need for rural practitioners, Rooks recalls one of his now deceased patients, an old widower who lived alone in a little house out in the woods. The old man loved his independence and being out in the country, but he had a stroke that left him wheelchair bound.

After the old man checked himself out of the nursing home and returned to his house, Rooks told him he really shouldn’t be living alone. But the old man said he wasn’t afraid of dying — he just wanted to live out the rest of his life on his terms.

Rooks took care of the old man, until he died one day in his little home in the woods.

“Particularly if you’re out in the boondocks, to have somebody just willing to be your advocate and help you along on your terms is invaluable,” Rooks says. “When you do that for somebody, I think you do feel particularly gratified.”