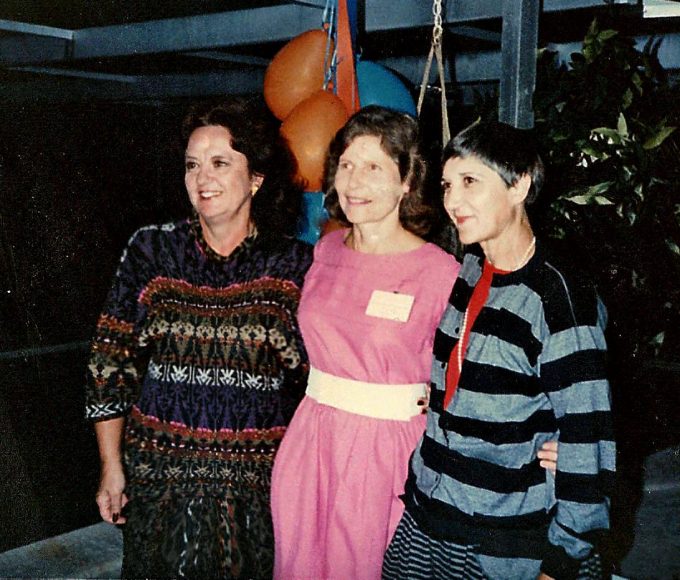 (From left) Agnes Whitley, MD, Suzanne Regul, MD, and Eugenia Riet, MD, graduated from the UF College of Medicine in 1962 as the only women in their class. Although they went their separate ways after graduation, they remain connected today. Here they are pictured at Alumni Weekend 1982.

Suzanne Regul, MD, Eugenia Riet, MD, and Agnes Whitley, MD, might seem like an unlikely trio. Regul is a Floridian who knew from adolescence that she wanted to be a doctor. Whitley is a refugee from Hungary who never had the chance to attend high school. Riet and her family escaped from Russia during World War II.

But these three women have one thing in common. They began their journey into medicine in 1958 as the only women in their class at the UF College of Medicine — at a time when women were just beginning to make their mark in the medical field. And despite their different backgrounds, the common bond of medicine is a strong one.

“We had a lot in common back then,” said Whitley. “We were able to talk about issues that were unique to us — and that we may not have shared with the men in our class.”

While Riet, Regul and Whitley may have shared many experiences during medical school, they went their separate ways after graduating in 1962. Today, with decades of practice under their belts, they are scattered throughout the western part of the U.S. Regul, a retired obstetrician/ gynecologist, lives in San Jose, Calif. Riet, an anesthesiologist, lives in Salt Lake City, and Whitley, a retired psychiatrist, is in Dallas.

Forty-five years after their graduation, Whitley brought the group together again by hosting a pre-Alumni Weekend gathering at her home before the trio attended their milestone reunion in Gainesville in 2007.

“We flew in that afternoon, and had dinner together at Agnes’ home. We had a wonderful time together,” Regul recalls.

The next day they flew to Orlando together, and Riet’s son, Rudy, drove them to Gainesville to meet the rest of their class.

The women discovered they had more in common as the years passed. Juggling a medical practice and a family was something they could all relate to.

“You know what they say, every woman doctor needs a wife,” said Whitley.

Alumni Weekend 2007 wasn’t just a reunion for the women of the class of 1962 — it was the rekindling of a relationship.

“It was like we were having a great adventure together — appreciating that we were still allowed to be alive and enjoy each other’s company, listen and be happy together,” said Regul.

With their 50th reunion approaching in October, the women are making plans to reunite once again. Whitley said she doesn’t know how she is going to come to this year’s reunion — with travel being increasingly challenging — but she said adamantly, “Yes, I am going to come!”

The first woman to graduate from the UF College of Medicine gives back.