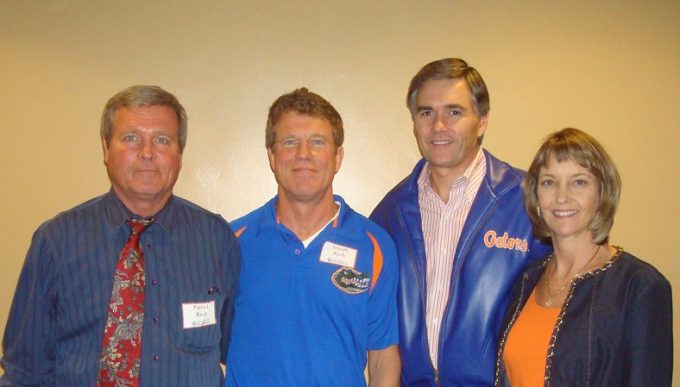 (From left) Patrick Rush and Joseph Rush, MD, with Dr. Michael Good, dean of the UF College of Medicine, and his wife, Danette.

Joseph M. Rush, MD, was working in a rural clinic, caring for a child suspected to have diabetes insipidus when he used a computerized medical-information tool to find a simple test to determine if the child had the condition.

It was at that moment when the physician/engineer realized all his work had paid off.

“All we needed was the information,” Rush said. “I developed the program, but this was the first time I really got to use it.”

Rush went on to a most successful career in medical informatics, but always held a special appreciation for rural medicine.

He recently donated $100,000 to the college to establish the Rush Family Scholarship. The endowed fund will assist students with financial need who plan to practice rural or family care.

“I found out that I really like rural medicine,” said the St. Petersburg native. “There, you have got to practice simple, proper medicine.”

One of 12 children, Rush earned a bachelor’s degree in mathematics and a master’s degree in engineering from UF before receiving his medical degree in 1986 from the University of Miami Miller School of Medicine.

After an internship at Miami’s Jackson Memorial Hospital, Rush was chosen for a medical informatics fellowship at Harvard University. He met Harvard professor Burton Rose, MD, and the pair collaborated to create the UpToDate program. The tool, first released in 1992, helps doctors make decisions at the point of care by providing them with the most up-to-date medical information.

The same year, Rush accepted a faculty position at the UF College of Medicine’s department of family medicine, where he gained his rural medicine experience.

Boston-based UpToDate Inc. continued to grow, and Rush left UF in 1997 to manage the business. UpToDate is currently used by half a million clinicians in 147 countries and at 38 of the top 40 medical centers in the U.S.

In 2007, Rush sold his business and returned to Gainesville. He no longer practices medicine but is currently assisting part-time with Shands at UF’s transition to the Epic electronic medical records system. Rush said he still loves technology, but medicine was where he felt he could make the most difference.

“Fundamentally, I’m a doctor and I want to save lives, and that’s where the rubber hits the road,” he said.

The women of the class of 1962 reunite