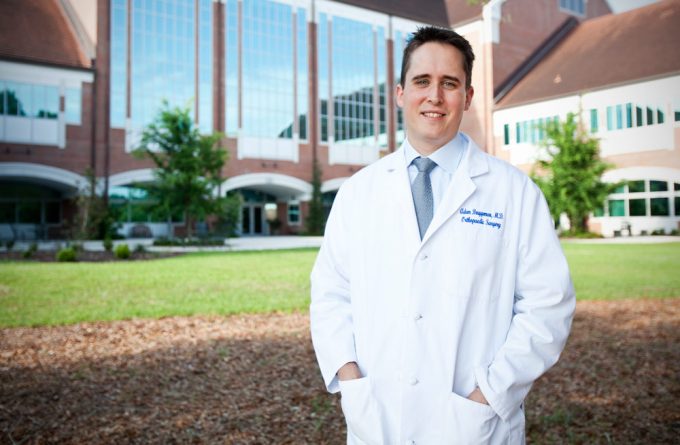 UF orthopaedics resident Adam Bruggeman’s nickname is “the Senator” for his involvement in health policy and politics nationally.

The 32-year-old chief resident is the rare young physician who can feel equally at ease in the surgery suite, the corporate boardroom and the state capital.

“He has been very active in leadership — he’s thoughtful, a clear thinker,” said Mark T. Scarborough, MD ’85, chairman of UF’s department of orthopaedics and rehabilitation. “I think he’ll continue to be very active in orthopedics politics and health policy.”

Bruggeman has already made a name for himself as a resident leader on both Association of American Medical Colleges and American Orthopaedic Association committees. Nominated by Scarborough, he was chosen in 2010 to be the AOA’s representative on the AMA’s Organization of Resident Representatives, which discusses various policies affecting residents.

He was one of only two orthopaedic residents chosen nationally for a two-year term on the organization and was the only resident from Florida selected.

He also served on the AOA’s 15-member Academic Leadership Committee, assessing the needs of the academic orthopaedic community and recommending new initiatives.

Physicians and lawmakers often don’t see eye to eye on issues, but Bruggeman, who also completed a master’s degree in hospital administration, believes it’s important for the two to better understand each other.

“There has to be people that bridge the divide,” he said. “I think there is a big opportunity for physicians to inform policymakers.”

The Center for NeuroGenetics at UF receives a $1 million grant from the W.M. Keck Foundation.