Bob Bjurstrom had lived with aortic stenosis for more than 20 years. As time went on, the retired anesthesiologist’s heart was working harder and harder to push blood through his narrowing aortic valve, causing extra strain and dangerously weakening his heart.

While the gold standard way to repair the problem is replacing the valve through open heart surgery, for some people, such as Bjurstrom, 85, this is not an option because of co-existing health issues that do not make them a candidate for traditional surgery. But as luck would have it for the Gainesville resident, UF interventional cardiologists R. David Anderson, MD, MS, and Anthony Bavry, MD, MPH, were teaming up with UF thoracic and cardiovascular surgeons Charles Klodell, MD, and Thomas Beaver, MD, MPH, to bring a newly Food and Drug Administration-approved procedure to UF&Shands aimed at correcting aortic stenosis.

The procedure, called transcatheter aortic valve replacement, or TAVR, was FDA-approved in November for patients with symptomatic severe aortic stenosis who can’t undergo open heart surgery and in whom coexisting health conditions would not preclude the expected benefit from the correction of the aortic stenosis.

After thorough evaluation, on March 20, the first day the procedure was performed at UF&Shands, Anderson and Klodell worked together to guide the valve via a catheter in Bjurstrom’s leg up to his heart and then anchor it inside the diseased valve by inflating a balloon. The team placed an artificial 26-millimeter valve into Bjurstrom’s native valve, of which the opening had shrunk to less than one centimeter. 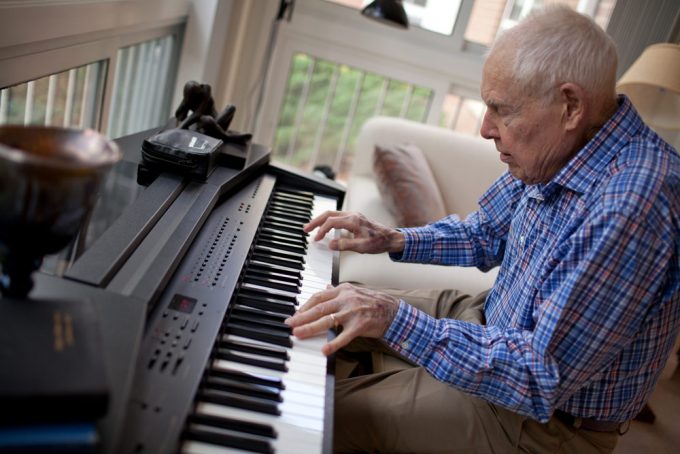 A little less than a month after his procedure, Bob Bjurstrom plays a cheerful melody at his home. As he continues to regain his strength, he looks forward to playing the keyboard more, watching Gator sports and enjoying the classes offered at Oak Hammock’s Institute for Learning in Retirement. Photo by Jesse S. Jones

Klodell said it felt exhilarating to be involved with the first of these procedures, also known as a percutaneous minimally invasive valve, at Shands. “Seeing a patient this age, with his overall health, bounce right through the procedure is revolutionary.”

UF physicians point out that while the procedure offers a potential option to patients who previously had none, there are risks associated with it, such as death, stroke, damage to the artery used for insertion of the valve and major bleeding. Also, data about how long the valve will hold up need to be determined. The UF team weighs the benefit versus risk with each patient.

“Such a dramatic innovation in our ability to treat a specific disease comes along rarely,” Anderson said. “We are very lucky to be a part of it.

Bjurstrom, an anesthesiologist for 30 years, is familiar with advancing the practice of medicine. In 1956, he and another anesthesiologist set up a practice in Eau Claire, Wis., with the both of them covering two local hospitals. Over the years the practice grew, and even after he retired Bjurstrom continued to advise the group, which now consists of nearly 60 anesthesiologists and nurse anesthetists.

Bjurstrom and his wife, Dorothy, will be married for 66 years this August. The couple married just before he attended medical school. They emphasized their bond, saying it gets stronger as they age.

“I am very excited,” Bjurstrom said, “to be given this opportunity to be with Dorothy.”

Audrey’s journey across the world

A six-year-old from Australia comes to the UF Proton Therapy Center for brain tumor treatment.
By Mina Radman