Appointment to an endowed professorship or chair is one of the highest honors an academic institution bestows on its faculty members.

The UF Health Science Center honored 17 newly endowed professors during its inaugural Celebrating Distinction ceremony Oct. 12. Some of the professorships were brand new, while others were named during the past year. 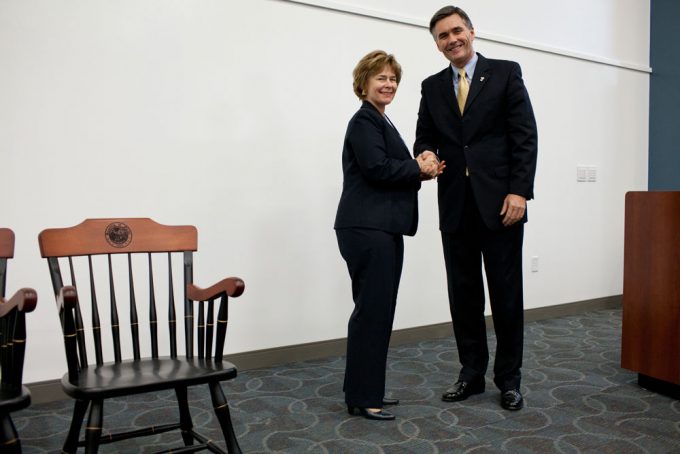 With resounding applause from colleagues and families filling the new auditorium at the College of Veterinary Medicine, the recipients were awarded specially engraved chairs to mark their achievements.

While welcoming more than 100 faculty, staff and guests to the ceremony in a video message, David S. Guzick, MD, PhD, UF senior vice president for health affairs and president of the UF&Shands Health System, called this event the start of what will become an important tradition at the UF Health Science Center.

“Buildings are constructed a brick at a time, but great universities are built chair by chair,” Guzick said, adding that endowed professorships and chairs create an enduring legacy that provides stability across generations in the academic pursuit of improving health care in our community and around the world.

UF President J. Bernard Machen, who hosted the event, instituted the Faculty Now Initiative, through which the university immediately matches 4 percent of donors’ gifts. Several of the professorships honored at the ceremony were made possible through the initiative.

“This celebration embodies what UF is all about,” Machen said. “We’re here to help people lead healthier, happier and more fulfilling lives. The generosity of the donors helps us recognize our productive faculty.”

Michael L. Good, MD, dean of the UF College of Medicine, congratulated the diligent faculty and publicly thanked the donors for their support in ensuring the continuity of innovation that makes UF and its colleges great.

“What you do makes a difference and it helps us to move forward,” Good said. “I am already looking forward to next year’s ceremony.”

A new hospital home for children

Shands Hospital for Children at the University of Florida opens its doors.