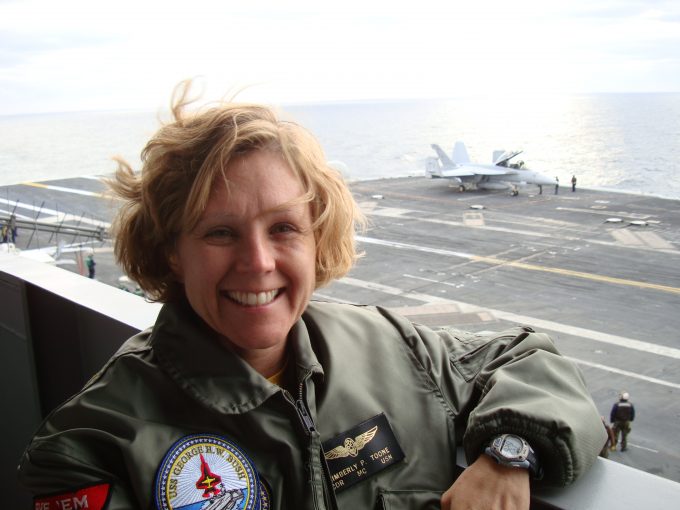 Pictured in front of the flight deck of the U.S.S. George H.W. Bush CVN-77 is Kimberly P. Toone, MD ‘97, senior medical officer aboard one of the largest U.S. Navy aircraft carriers in the world.

Above Kimberly P. Toone, MD’s office, sleek F-18 jets roar off into the sky from the ship’s flight deck and the deep blue ocean stretches out in all directions.

A commander in the U.S. Navy Medical Corps, Toone was appointed to the job in March 2011 and is currently the only woman holding such a position.

“I’m one of those very lucky people who is doing a job that makes them wonderfully happy,” Toone said in a phone interview from the ship.

A family medicine doctor with a master’s degree in public health, she cares for the ship’s 5,000-person crew and oversees its 50-bed hospital, which includes a three-bed intensive care unit. She also is the medical provider for four other smaller ships, which have approximately 1,000 crew members combined. 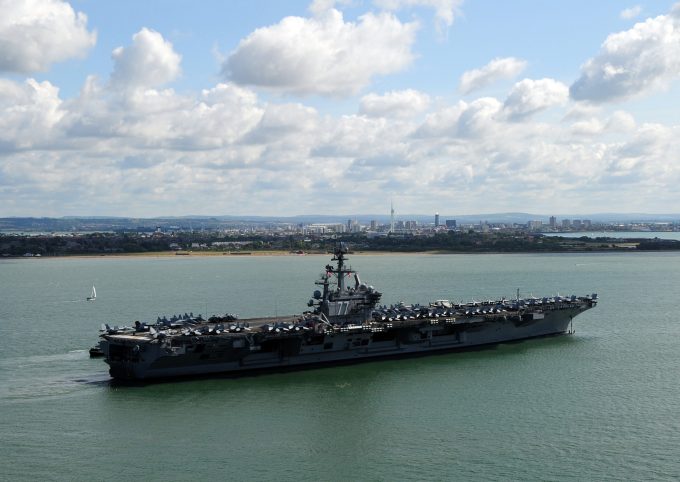 Also serving as the ship’s public health officer, she oversees everything from ensuring the safety of the crew’s food and water to performing radiation health physicals on individuals who work on the ship’s two nuclear reactors.

Back on land, Toone lives in Pensacola with her husband, Michael, and 10-year-old daughter, Sarah. It’s hard being away from her family, but Toone said they are supportive.

“Separation is difficult but you just accept it,” she said.

Toone didn’t initially plan to make the military her career long term, but 18 years later, she is still serving proudly. After medical school, she completed a pediatrics internship at National Naval Medical Center in Bethesda, Md., then a family medicine residency at the Naval Hospital in Jacksonville and an aerospace medicine residency in Pensacola.

She gave birth to her daughter while serving as a general flight surgeon for a helicopter squadron in Jacksonville, where she learned to fly a Navy Seahawk helicopter.

Toone has also served overseas as a family practice physician at a U.S. Naval Hospital and a flight surgeon for a U.S. Marine Corps Air Station in Okinawa, Japan.

“It’s very satisfying — every day something different is going on and everything is a challenge,” she said. “This is my dream job.”

Once a Gator, always a Gator

College of Medicine graduates cheered on the Gators at Ben Hill Griffin Stadium and toured the growing campus.