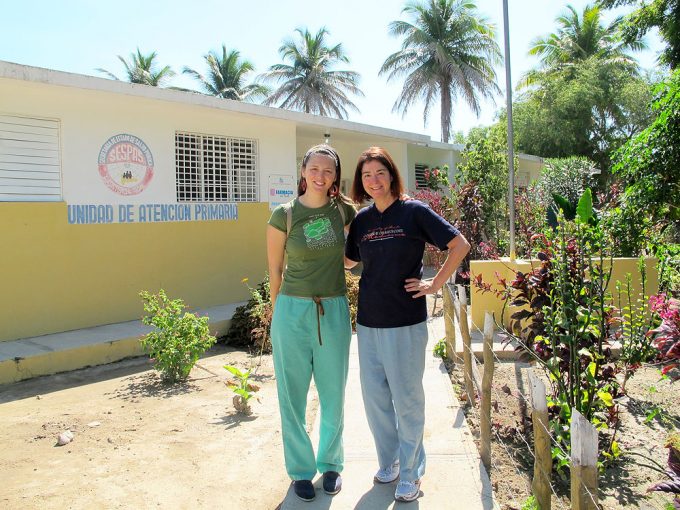 Jennifer Sbicca, a third-year medical student at the UF College of Medicine (left) and her mom, Anne Claiborne, MD ‘79, a radiologist in Orlando, stand beside a clinic on the Dominican Republic-Haitian border. The pair went on a health trip organized by UF’s Project Haiti volunteers in March 2011.

UF College of Medicine alumna Anne Claiborne, MD ’79, always wanted to go on an international health outreach trip but never had the opportunity as a medical student 30 years ago.

But this spring, the Orlando diagnostic radiologist finally got the chance — alongside her 26-year-old daughter, Jennifer Sbicca, a third-year medical student at UF.

The pair spent a week in March with UF’s Project Haiti volunteers, working with patients on the Dominican Republic-Haitian border. It was the first international health trip for both of them.

“We’d never done a trip together, just the two of us,” Sbicca said. “It definitely brought us closer.”

It also let the two see each other in a different light — as health care professionals.

“We got to work as a team,” said Claiborne.

The UF Project Haiti group, which was made up of two dozen medical students and six attending physicians, flew into the Dominican Republic and worked at clinics providing free medical care to hundreds of patients a day. Unfortunately, they were not able to cross the border into Haiti, due to unrest during elections and a cholera outbreak, Sbicca said.

With limited resources, the team had to fall back on some of the basic skills they learned in medical school and saw tropical diseases and other rare conditions they hadn’t seen in the U.S.

“It’s truly global medicine — I think that’s so exciting for the students to see,” said Claiborne. “It was exciting for me to see.”

Both Claiborne and Sbicca said they would love to help out on another international mission trip together and next time include the third doctor in the family — Bill Grisaitis, MD, who is Claiborne’s husband and Sbicca’s father. Grisaitis, who did his internal medicine residency at Shands at UF, is a dermatologist in the Orlando area.

“It’d be great to go back — and go back with dad this time,” Sbicca said.