For Brian J. Young, his metastatic cancer diagnosis made him feel like he had landed on the dark side of the moon — in a cold and lonely place.“For me, it was like my cancer was a specter stalking me,” he said. “It was a feeling of great dread of my mortality.”

Young’s cancer journey began in 2008 when he noticed stiffening in his right shoulder and an olive-sized lump on his collarbone. As an electrical engineer and busy project leader in Cape Canaveral’s space program, Young’s most urgent priorities were mission critical to his job, and it wasn’t until several months later that he brought the strange lump to the attention of his primary care doctor.

His doctor referred him to Luc Teurlings, MD, FAAOS, at Space Coast Orthopaedic Center in Merritt Island, Fla., who completed his residency training at UF in 1997. Scans revealed a tumor originating in the soft tissue of Young’s right shoulder that had spread into the bone at the top of his shoulder blade. It was this part of the tumor that was protruding from above Young’s collarbone. Teurlings counseled Young to seek treatment from the orthopeadic oncology team at Shands at UF as his best bet to receive the highly specialized surgery to remove the tumor without amputating his arm.

“I realized, ‘Oh boy, this is getting to be awfully serious.’ We were talking about Shands and other places that could treat this,” Young said. “My doctor said, ‘You’re going to get yourself better care up in Shands,’ and I decided I’ll do anything I have to do, go anywhere I have to go on the face of this Earth in order to fight this … I’m not going to go quietly into the night.” 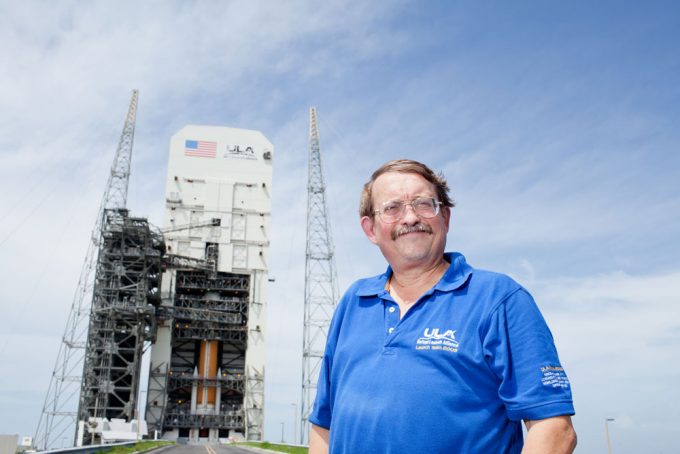 Since boyhood, Young has been inspired by space exploration, and his work as an electrical engineer for United Launch Alliance on Florida’s Space Coast has been both thrilling and fulfilling. The list of project assignments on his resume reads like a “who’s who” of space shuttle and Delta IV rocket missions. His intellectual thumbprint is on the successful space deployment of NASA and military satellites, the Jupiter space probe Galileo, the Ulysses spacecraft, the Chandra X-Ray Observatory, the Russian Docking Module for the Mir Space Station, and the first American elements of the International Space Station.

Now, beating cancer became Young’s most important mission. As with the other big projects in his life, he tackled it with the pragmatic mindset of a problem to be solved.

“He’s an engineer, so engineers are usually, ‘What’s the problem? How am I going to fix it?’” said Mark T. Scarborough, MD ’85, chair of the UF College of Medicine’s department of orthopaedics and rehabilitation and the William F. Enneking, William E. Anspach, and Orthopaedic Alumni endowed chair. “That’s the approach he took.”

It was an approach that Scarborough could appreciate as the leader of an interdisciplinary team dedicated to treating the most difficult and complex bone and soft tissue cancers for adults and children. Young met with UF’s team of surgeons, pathologists, radiologists, radiation oncologists, medical oncologists, social worker and others who worked to develop a comprehensive treatment plan tailored to his needs. In Young’s case, that called for six weeks of radiation therapy to shrink his tumor followed by surgery.

Fortunately for Young, before coming to Shands he hadn’t had any surgeries or other treatments that may have complicated the limb-conserving treatment plan outlined for him. The surgery itself was lengthy and complicated, requiring removal of the soft tissue sarcoma — including some of the bone on the shoulder blade and in the shoulder joint where the cancer had infiltrated — followed by reattaching critical ligaments and muscles to preserve the functional mobility of his arm. Less than two weeks after surgery, Young was back at work, with his arm in a sling.

“The level of care and limb salvage surgery with the interdisciplinary care that we provide is not available in the community setting. It really requires the expertise of an orthopaedic oncologist,” Scarborough said. “Limb salvage surgery, which we can do 90 percent of the time in patients with bone or soft-tissue tumors, is most important in the upper extremity because part of what makes people human is the ability to use their hands … the loss of an arm is a devastating functional problem.”

That expert, interdisciplinary approach was just as critical to Young’s long-term prognosis as it was to his initial treatment. As many as 40 percent of soft-tissue sarcoma patients will experience disease progression, and Young was among that group. In August 2009, within a year following surgery, Young’s CT scans showed suspicious nodes in the upper lobe of his left lung. A biopsy confirmed malignancy, and the cast of characters on the interdisciplinary team expanded to include specialized treatment specific to the location of the nodes. Charles T. Klodell, MD, an associate professor of thoracic and cardiovascular surgery and director of the LVAD program and the Cardiac Intensive Care Unit at UF, was called in as the expert to perform the surgical resection of the tumors.

After some time was allowed for Young’s incisions to heal, he began chemotherapy with UF’s Nam Dang, MD, PhD, a professor and deputy division chief of hematology/oncology, and Bruce Stechmiller, MD, a clinical associate professor of hematology/oncology. Another year passed, and a follow-up scan in August 2010 revealed that while the smaller nodules were surgically removed by Klodell there were three others still in the lung that looked like they had the potential for growth. The most conservative course of action was radiation surgery.

“When we do our work using minimally invasive therapies, whether it’s video-assisted thoracoscopic surgery or stereotactic radiosurgery, we don’t burn a lot of bridges,” said Robert A. Zlotecki, MD, PhD, an associate professor and medical director of radiation oncology at UF. “We anticipate the fact that even though we’re trying to perform curative procedures we don’t want to do anything that would limit other therapies down the road or compromise the patient’s quality of life.”

Zlotecki noted that many people who have soft-tissue sarcoma metastasis have the potential to be cured with early detection, but the key is in the interdisciplinary approach that takes advantage of the great expertise of doctors in many specialties to broaden treatment modalities without compromising the patient’s options for future treatments.

“We know the high risk of metastatic disease in patients with soft-tissue sarcoma and we follow it aggressively because a high percentage of those patients can be cured, definitely, with early detection and aggressive intervention,” he said. “This is where I think our institution has a great track record and offers a great benefit to these patients, not just excellent management of their primary presentation, but continuing management of their case if they’re unfortunate to be one of the three or four out of 10 people who do have progression of this aggressive disease.”

That passionate approach to patient care is one that resonates with Young. He finished his last round of radiation therapy in August 2010 and returns to Shands at UF every three months for CT scans and radiographs. The fear of what might be discovered during these follow-up visits weighs heavily on him and his physicians.

“This September I had the CAT scan, and I thought, ‘Can I get past a year? Can we get past this?’” Young said. “But Dr. Stechmiller called and said everything looked good.”

Young has discovered that landing on the dark side of the moon is just part of the journey. Rather than dwelling on negatives, he gains positive energy from taking pleasure in his work, in the love of his friends and family, and in looking toward the future.

“I always wanted to live a long life, and I guess I’m going to have to do it in three-year installments. My goal is to get to 2013, 2014 and then we’ll shoot for 2016,” Young said. “If we can keep this in check and I can maintain a pretty good quality of life, then, hey, I can live with that.”

Annalise Mozer remembers the exact date when her life changed forever. It was March 10, 2010.
By Melanie Stawicki Azam