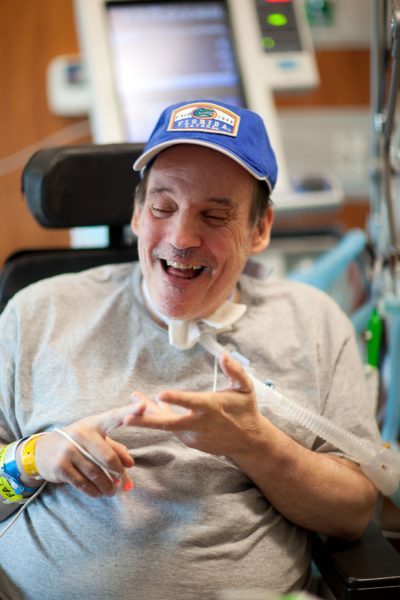 Michael Stanzione became the first person with Pompe disease in the world to receive a diaphragm pacing system, enabling him to breathe freely for the first time in four years. UF surgeons implanted the system, allowing Stanzione to resume a fulfilling life at home instead of in the hospital room. Photo by Jesse S. Jones.

It was a week of firsts for 8-year-old Brian Stanzione — first plane ride, first stay in a hotel and first visit to Florida.

But Brian was not flying from New Jersey to visit Disney World; he came to visit his dad, Michael Stanzione, 53, who became the first person with Pompe disease in the world to receive a diaphragm pacing system, enabling him to breathe freely for the first time in four years.

UF surgeons implanted a diaphragm pacing system in a spine-injured patient in March 2009, but the device had never been given to a Pompe disease patient before.

For Stanzione, the procedure is expected to free him of the ventilator that has kept him in the hospital for the past four years and let him resume a more fulfilling life. He hopes to live with his wife and only child in his own house again and go on outings with them, like swimming or to a baseball game.

“I would think all Brian remembers is me in the hospital,” he said. “Just sitting down doing homework with him — I would love.”

Sitting in his dad’s lap in the Shands hospital room and playing with the remote-controlled window blinds, Brian hopes for the same thing.

“I’m happy, because he gets to come home,” said the boy, taking off his dad’s UF Gators hat and rubbing his head affectionately. 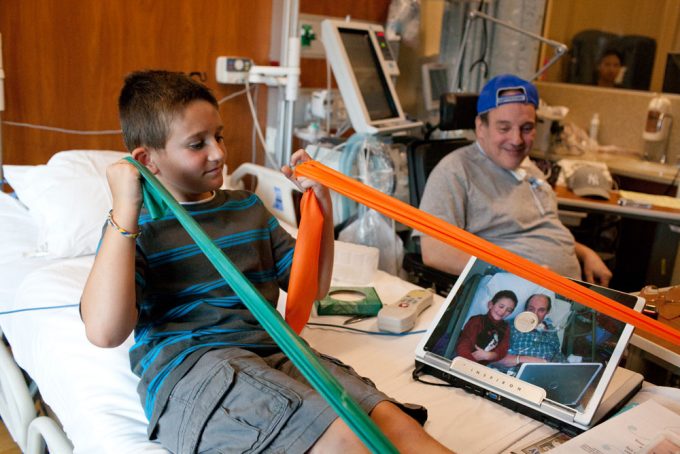 After Michael Stanzione’s Aug. 15 surgery, Brian Stanzione visits his father at Shands at UF and tries out his exercise bands. Photo by Jesse S. Jones.

Stanzione only found out a few years ago that he has Pompe disease, but he has been dealing with the condition for the past 15 years.

The focus of a research program at UF for more than a decade, Pompe disease is a rare inherited neuromuscular disorder that causes muscle weakness in people of all ages. People with Pompe disease cannot produce the enzyme acid alpha-glucosidase, so sugars and starches stored in the body as glycogen accumulate and destroy muscle cells, particularly heart and respiratory muscles. Many patients eventually need ventilators to breathe.

The computer programmer was about 35 years old when he first realized his gait was off and it was harder to walk up stairs and get up from a chair. He was misdiagnosed with polymyositis, an inflammatory muscle disease that causes weakening of the skeletal muscles.

But then his breathing became affected and in March 2007, he went to the emergency room “thinking they’d give me a pill and I’d be home in a few hours.”

He was admitted to the hospital, received a tracheotomy and another muscle biopsy, which indicated that he had Pompe disease. That’s when he was put on a ventilator.

His wife, Debbie, works full time and his insurance would only cover a couple of hours of home health care per day. But, being on a ventilator, he needed much more and landed in a long-term care facility for four years.

Last Christmas, Stanzione was able to go home for five hours. He also was able to attend his son’s First Communion and surprised him by showing up at one of his football games.

“With my son growing up, it hasn’t been easy,” he said.

Stanzione first heard of the diaphragm pacing system about a year ago and figured if there was some way to get him off a ventilator and back home, he was determined to find it — wherever it was.

“Once I heard about it, I was just of the mindset — I have to do this,” he said.

Part of an Internet network for Pompe patients, he posted a question, asking if anyone knew someone who performs this procedure.

“Somebody from Gainesville contacted me,” he said. “It was George Fox.”

Fox directed him to his son Phoenix’s doctor, Barry Byrne, MD, PhD, a professor of molecular genetics in the UF College of Medicine and the director of the Powell Gene Therapy Center.

Byrne does research and clinical trials aimed at helping those affected by genetic muscular diseases, including Pompe. Phoenix Fox, 8, was diagnosed with Pompe disease as an infant and his family moved to Gainesville from the Florida Keys to be closer to the treatment offered by Byrne.

“We have to undo years of inactivity — but he’s a pretty motivated guy, so I think he’ll get there.”

Stanzione and Byrne met last year and both were eager to try the procedure on someone with Pompe disease.

“He’s very motivated — he wants to improve his situation and get home to his family,” said Byrne. “Brian is a big motivator for him.”

Stanzione arrived at UF July 12, after a 21-hour drive by a medical transport company. After the surgery, he had to be gradually weaned off the ventilator.

“I was scared but it wasn’t stopping me,” he said. “If there was a 1 percent chance of this working, I would have done it.”

A giant step toward freedom

A month after the procedure, Stanzione left Shands at UF to undergo about three weeks of intensive rehabilitation at the Kessler Institute for Rehabilitation in West Orange, N.J.

“I’m very glad I did it, it was the right move,” he said in a phone interview Sept. 28 at the Kessler Institute.

At that time, Stanzione could be off his ventilator for up to an hour at a time and he hoped eventually to be able to be off it most of the day. Even if he never got off it completely, his greatly reduced dependence on the ventilator “would be a success in my book,” he said.

The other big success was reaching his ultimate goal — being able to live at home again with his family. His physical and occupational therapy was grueling, but he was glad to be preparing to go home in mid-October.

When asked what he is looking forward to doing with his son, he simply replied, “Everything.”

The risk paid off. On Oct. 18, Stanzione, who was able to be off his ventilator for up to 12 hours a day, finally got to go home.

Without constantly being on a ventilator, Stanzione may even be able to get out of his wheelchair, said Byrne. That’s because he would have the freedom to exercise and strengthen his muscles more, which he wasn’t able to do constantly tied to a ventilator. 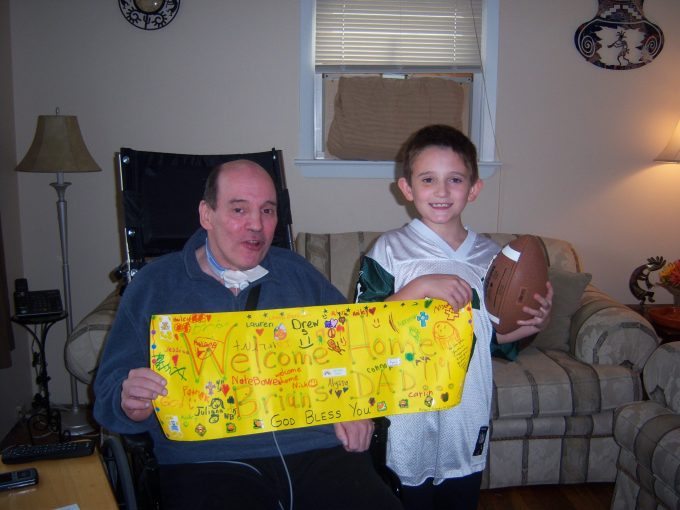 Michael Stanzione and his son, Brian, are photographed at home in New Jersey. After his groundbreaking surgery at UF, Stanzione was able to go home for the first time in four years. Photo provided by Michael Stanzione.

“We have to undo years of inactivity — but he’s a pretty motivated guy, so I think he’ll get there,” Byrne said.

Stanzione’s success was a team effort, involving everyone from nurses, physical and respiratory therapists and researchers studying the respiratory deficiencies related to Pompe disease, Byrne said.

When asked if additional Pompe patients might undergo the procedure, Byrne said it’s possible. However, there isn’t a second candidate lined up yet, because physicians want to continue to see how Stanzione progresses.

Lottenberg said he’d be happy to do another such surgery on a Pompe patient if Byrne has another candidate, although the procedure can be more challenging on Pompe patients, compared with spine-injured patients. That’s because Pompe is a progressive, debilitating disease, so the diaphragm muscle is weakened, compared with spine-injured patients, who typically have normal, strong diaphragms, Lottenberg said.

It’s still uncertain if Stanzione will ultimately get off the ventilator completely, Lottenberg said, but he added, “I think he is doing well.”

Islam assisted with the procedure, since the technique can also be used for children.

Monique Griffin, an Orlando woman diagnosed with Pompe disease in January 2010, said she was excited for Stanzione, whom she visited in the hospital in July after corresponding with him online.

“There’s a pretty tight-knit group of Pompe patients who know each other through Facebook,” she said.

Griffin said she and her peers are watching to see how Stanzione progresses, knowing there is a possibility that if his case is successful, other Pompe patients may be able to have the procedure and improve their quality of life also.

“Everything that Dr. Byrne and his team are doing — it’s very hopeful and promising to all of us,” she said.

Discovering the bright side of the moon

For Brian J. Young, a metastatic cancer diagnosis made him feel like he had landed on the dark side of the moon.
By Lindy Brounley