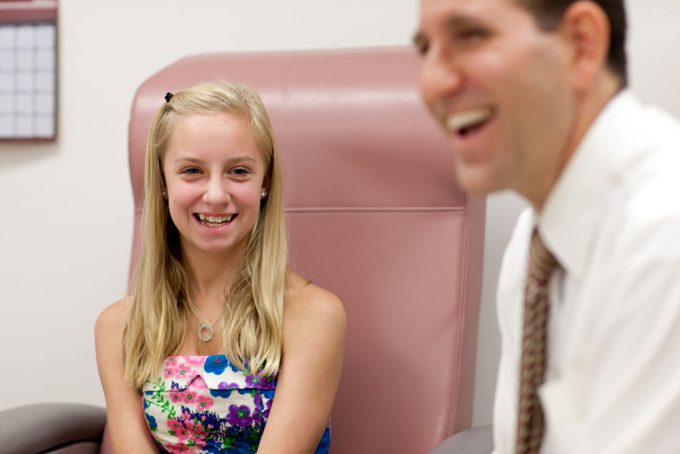 During a recent visit to UF, Annalise Mozer shares a laugh with internationally recognized diabetes researcher Michael Haller, MD ‘00, an associate professor of pediatrics at the UF College of Medicine.  Mozer has traveled to UF five times this year to participate in a Type 1 diabetes clinical trial led by Haller. Photo by Jesse S. Jones.

“I had a feeling something was wrong,” said Mozer, now 13. “I was extremely thirsty and went to the bathroom all the time.”

It’s not easy managing Type 1 diabetes, also known as juvenile diabetes, which is an autoimmune disease in which the insulin-producing cells in the pancreas are destroyed by the immune system.

Mozer must now give herself up to six insulin injections a day, monitor her blood sugar and carefully plan what she eats.

Yet, despite the lifestyle changes she has undergone, she has actively taken steps to help fight the disease and educate others with Type 1 by volunteering as a control group participant in a clinical trial at the University of Florida.

Mozer has flown to Florida from Long Island, N.Y. and back again five times in the past year. She stays overnight at Shands at UF and in the morning has several blood samples taken for the study before leaving.

Doctors monitor Mozer to determine if her body is still producing a certain amount of insulin, despite the diabetes. But because she is in the control group, she gets no infusions.

“Annalise is of tremendous value to our study,” said Haller, a pediatric endocrinologist. “She’s as important, if not more important, than those subjects who receive the cord blood infusions. Without controls, we can never be sure if a therapy works or not.”

Haller’s research focuses on developing safe and effective therapies to prevent and reverse Type 1 diabetes. Multiple studies involving the umbilical cord blood stem cells have been done over the past several years. Currently, the infusions do not demonstrate a clear long-term benefit but do demonstrate potentially beneficial changes in immune function. Haller hopes further studies using specific cells in cord blood given at higher doses and in combination with other agents may produce better results.

“Combination therapies will most likely be needed to deal with Type 1 diabetes, because it’s such a complex disease,” Haller said.

His short-term goal for his research is to find ways to slow down the autoimmune process to keep the patient producing his or her own insulin as long as possible.

Type 1 diabetes patients from around the U.S., Mexico and Canada, ranging in age from 2 to 13 years old, have participated in Haller’s studies.

“The distance our study subjects travel speaks to the unique opportunities we offer here at UF and also demonstrates that there are not enough clinical trials available for kids with Type 1 diabetes,” Haller said. 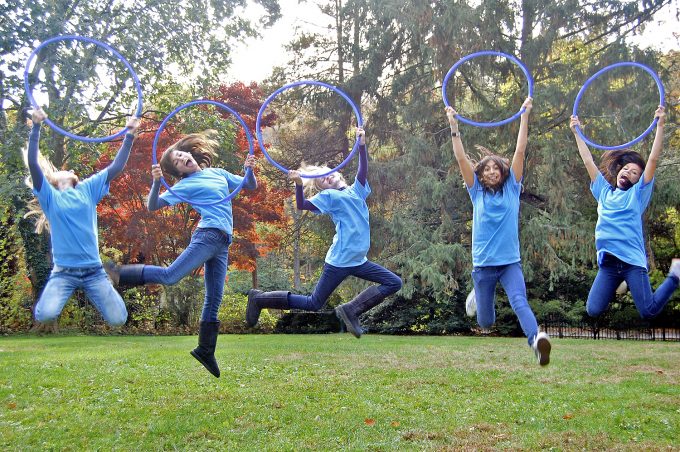 Annalise Mozer (first on left) and her friends, “the Diabetes Divas for the Cure,” tied for first place in the UF’s Diabetes Center of Excellence “Blue Circles for Diabetes” photo contest in November 2010. Photo provided by the Mozer family.

After having been a control, Mozer now has the option to be a participant in Haller’s future studies if she wishes.

Meanwhile, she continues to fight against Type 1 diabetes at home.

Calling themselves “The Diabetes Divas for the Cure,” Mozer and nearly a dozen of her friends have held fundraisers at their middle school and are selling colorful wristbands that read “2 Sweet 4 Sugar/Cure Diabetes!” To date, their efforts have raised $1,600 for the Long Island Chapter of Juvenile Diabetes Research Foundation International.

Annalise’s mother, Liz Mozer, also helped set up a website at http://2sweet4sugar.webs.com, where the wristbands can be purchased for $5. The money from each wristband sold goes directly to the Long Island Chapter of the JDRF.

The Diabetes Divas also received recognition from the UF Diabetes Center of Excellence when they posed for a photo that tied for first place in the “Blue Circles for Diabetes” photo contest in November 2010. The blue circle is a symbol of the International Diabetes Federation — the circle symbolizes life and health, and the color blue reflects the sky that unites all nations.

Mozer wears a light blue circle pendant around her neck. Since being diagnosed with Type 1 diabetes, she has realized she isn’t alone. But she still wishes it was easier to manage the disease and hopes Haller’s research may someday find a way.

“I’m hoping one of (the studies) will help,” Mozer said, “and I wouldn’t have to take as many shots of insulin as I do now.”