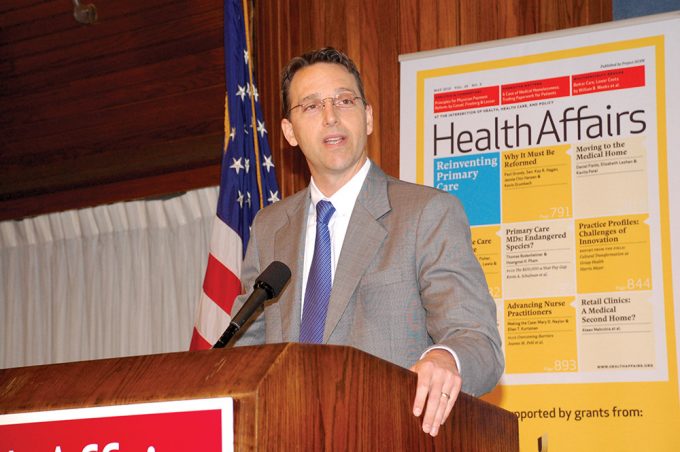 Robert Phillips Jr. MD, MSPH, a 1995 graduate of the UF College of Medicine, was one of 65 new members elected to the Institute of Medicine at its 40th annual meeting in October. Election to the IOM is considered one of the highest honors in the fields of health and medicine and recognizes individuals who have demonstrated outstanding professional achievement and commitment to service.

“As a physician in my early 40s, I didn’t anticipate receiving such an honor,” Phillips said. “I am stunned and so very thrilled.”

The IOM, an organization that provides health policy advice to the nation’s leaders, was established in 1970 by the National Academy of Sciences and has become recognized as a national resource for independent, scientifically informed analysis and recommendations on health issues.

Phillips, a family medicine physician, is director of the Robert Graham Center, a research center sponsored by the American Academy of Family Physicians dedicated to bringing a family practice and primary care perspective to health policy deliberations. His involvement with policy-making began as early as his medical school days. He was president of the American Medical Association’s Medical Student Section and a student representative for the Florida Medical Association Board of Governors.

“It is important for the college to prepare its students for any area within the medical profession,” said Michael L. Good, MD, dean of the College of Medicine. “Dr. Phillips is a wonderful example of how our graduates can have a meaningful and positive impact on health policy.”

After graduating with honors for special distinction, Phillips did his residency training in family medicine at the University of Missouri-Columbia, where he remained for a research fellowship, completing a master’s of science in public health. He has served on the American Medical Association’s Council on Medical Education as the president of the National Residency Matching Program and currently serves as vice chair of the Council on Graduate Medical Education. His research interests include physician-health system interactions and their effects on quality of care, geographic information systems and collaborative care processes. He is on the faculties of the department of family medicine at Virginia Commonwealth University, Georgetown University and George Washington University. He practices medicine at Fairfax Family Practice Center. The two are featured in a documentary “Angels of Milot” that traces their work in the northern mountains of Haiti just after the devastating earthquake that hit in January 2010. Lovejoy Jr., 72, is a retired orthopaedic surgeon from Jacksonville, and his son practices orthopaedic surgery at Children’s National Medical Center in Washington, D.C. His daughter, Ellen, is the filmmaker.

Lovejoy Jr. has been going to Haiti for 30 years with the CRUDEM Foundation. He often has his son join him on trips to Hôpital Sacré Coeur, where they have established a prosthesis lab. But, as the documentary shows, this trip was different. The documentary, which has aired on PBS stations throughout Florida, highlights their quick response to the disaster. “I called as soon as I heard about the earthquake and found out that our hospital was intact,” said the elder Lovejoy. “We began to organize a team and made it to Haiti four days later.”

“The first week we saw 180 patients. When we went back a couple weeks later, we saw 150 more,” said Lovejoy Jr.

He hopes the documentary will remind people of Haiti’s continued need for support.

Michael Haller, MD ’00, a UF College of Medicine diabetes researcher and assistant professor of pediatrics, recently received the Young Investigator Award from the International Society for Pediatric and Adolescent Diabetes at its annual meeting in Buenos Aires, Argentina, in October. The society recognized the 35-year-old for his work toward preventing and reversing type 1 diabetes.

Roberta M. Troy, PhD ’90, was selected as the founding director of the Health Disparities Institute for Research and Education at Tuskegee University in Alabama. Troy served as interim provost at Tuskegee and director of the Southern Association of Colleges and Schools-required Quality Enhancement Plan. After receiving her PhD in biochemistry and molecular biology from the UF College of Medicine, where she was also a McKnight pre-doctoral fellow, Troy completed a postdoctoral fellowship in molecular virology at the Cleveland Clinic Foundation. Troy has received several awards and honors in recognition of her teaching, research and service.

Jason Rosenberg, MD ’95, was selected by Florida Gov. Rick Scott to serve on Scott’s health care transition team. Rosenberg, a plastic and reconstructive surgeon in Gainesville, Fla., and president of the UF College of Medicine’s medical alumni board of directors, was appointed to the Board of Medicine in 2008.

Josepha Cheong, MD ’90, a UF College of Medicine psychiatry professor, received the 2011 American Association for Geriatric Psychiatry Educator of the Year Award. The award will be presented to Cheong in March at the AAGP annual meeting in San Antonio.