When you enter the Midtown Urology Surgical Center in Atlanta, you are greeted by autographed posters of James Brown on the walls, the sound of Motown tunes in every room and, most importantly, the charm and expert patient care of one of its most popular partners, Paul Alphonse Jr., MD.

Known to his patients and staff as the cool and smooth “Dr. A.,” Alphonse is a 1998 graduate of the UF College of Medicine who has become one of Atlanta’s most admired young physicians. He is recognized as an award-winning urologist and great friend to his patients and staff — and notorious for his shameless loyalty to the Florida Gators in a land where Bulldogs rule.

The orange and blue blood started seeping into Alphonse’s veins when he was a boy growing up in Apopka, just outside Orlando, but he became a true Gator in 1993 when he started medical school at UF. In fact, when asked about his recent honors, such as the Atlanta Medical Association’s Young Physician of the Year Award, he gives the credit to his alma mater.

“I’ve been very, very blessed with the success I’ve had at such an early age,” he says. “But I know it has nothing to do with me and everything to do with the early training I received from the UF College of Medicine.”

Alphonse understands that being successful takes not only hard work but also opportunity. It was the opportunity to work a yearlong clinical research project with former urology chairman Dr. Perinchery Narayan while in medical school that led to his receiving the Alpha Omega Alpha Medical Society research award as well as his interest in urology and, ultimately, his career path.

But the opportunities his parents provided had the most impact on Alphonse’s life, he says. Both his parents were born in Haiti, and each immigrated to the United States in the late 1960s when their country plunged into poverty under “Papa Doc’s” dictatorship. The couple met and later married in Newburgh, N.Y., where Alphonse was born. Eventually, the family left New York when he was 5 and settled in Apopka. 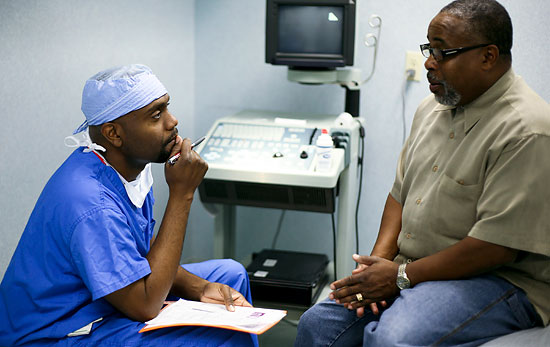 Paul Alphonse Jr., MD ’98, checks in with patient Vincent Alston at the Midtown Urology Surgical Center in Atlanta, where Alphonse is one of three partners. Photo by Priscilla Santos

“My family was truly blessed,” Alphonse says. “There were many of my parents’ family and friends who just didn’t have the means or the chance to come to the United States and make better lives for themselves.”

Doug Campbell, a first-year classmate, founded a nonprofit medical mission group called CHORES (Children’s Health Organization and Relief and Educational Services), Alphonse explains. “I was invited to tag along, and my life was forever changed,” he says.

“That experience triggered me to do something in Haiti,”

It wasn’t just the example from CHORES that influenced

Alphonse. His calling to Haiti can be traced back to his childhood, when he traveled to Cap-Haïtien during the summers and spent days following his aunt, a nurse who ran the largest local government health-care clinic.

“She challenged me to become a doctor, then return to Haiti to build a hospital,” he says. Paul Alphonse Jr., MD ’98, during the first Project Haiti medical outreach trip in 1996, notifies residents about the health fair organized by his team from the College of Medicine.

He didn’t build a hospital, but Alphonse and his classmate, Serge Geffrard, MD ’98, began what is the longest-running international medical outreach program for UF medical students. The first Project Haiti took place in 1996, and every spring students, faculty and staff from the College of Medicine and Shands at UF provide free health care to the people of Haiti.

“Project Haiti was one of the reasons I chose to attend UF,” says Rimple, one of this year’s project leaders and a member of the class of 2012. “Last spring break our group of 29 medical students and attending physicians were fortunate to travel to Haiti and experience health disparity at its worst.

“Seeing the poverty and the lack of access to basic health care changes your perspective on life,” he says. “Programs like Project Haiti are so valuable to medical students because they allow us to care for the most unfortunate. In addition, it is a great opportunity to learn from caring physicians and practice our clinical skills.”

After medical school, Alphonse completed a residency at Baylor College of Medicine in Houston. He and his wife, Latanya, moved to Atlanta, and just two years out of residency he was offered a partnership with Midtown Urology, where, he says: “I’m living the dream.”

“I’m very happy where I am right now in this practice,” Alphonse says. “This place functions like no other. We laugh together, smile together and cry together. We are a family.”

The Atlanta Medical Association awarded him the honor of Young Physician of the Year in 2006, when he was 33.

“When I was nominated and then received the award, I was overwhelmed,” says Alphonse, who lives outside Atlanta in Smyrna with his wife and two sons, Paul III, 3, and Preston, 1.

More recently, Alphonse was awarded the 2008 University of Florida Most Outstanding Young Alumnus Award and was appointed a member of the board of directors of the UF Medical Alumni Association, the youngest member and first African-American to hold such a position.

“It’s all very humbling,” says Alphonse. “You really don’t think you are doing anything spectacular; just taking care of your patients and serving your community.” Paul Alphonse Jr., MD ’98, was instrumental in making sure UF alumni in Georgia have the opportunity to purchase Gator license plates and show their school pride in the middle of Georgia Bulldog territory. There are approximately 7,000 Gator tags on cars in the Atlanta area today.

He’s taking care of his fellow Gators in Georgia as well.

As a member of the Atlanta Gator Club, Alphonse was instrumental in making sure that UF alumni living in Georgia can purchase Gator license plates and show their school pride among the throng of University of Georgia fans. And it wasn’t always easy — or nice.

“It got a little nasty there at times and was all over the newspapers,” Alphonse recalls. “There were a few senators and state representatives who weren’t too happy with me.

“We just fought for what was fair,” he says. “The state offered tags for other universities, such as Auburn, Alabama and Tennessee. They had no right to forbid Florida tags.”

Eventually, the state Legislature approved the Florida license plates, and Alphonse is happy to say there are approximately 7,000 Gator tags on cars in the Atlanta area today.

“Being in Atlanta is like being in a satellite community of the University of Florida,” says Alphonse. “There are so many UF alumni in the metropolitan area.”

With his successful practice, awards and now experience in political activism, what could be next for the physician? According to Latanya Alphonse, the only thing left for her husband to do is become the secretary of health.

“I don’t know about secretary of health, but I would be honored if President Obama assigned me to be the U.S. ambassador to Haiti,” he said. “I really would like to do more for my parents’ country. I see the struggle and would like to make a difference.”

Dr. Sonja Rasmussen was selected as a Health Protection Hero by the CDC.