Space and light separate the wings of the University of Florida Cancer & Genetics Research Complex.

Crisp, new administrative offices, an auditorium and a coffee shop branch from the common area. Touches of cherry complement the walls and doorways. On the various floors – five to the south on the UF Shands Cancer Center side of the building and six to the north on the Genetics Institute side – labs are open and face outward, as do the conference rooms on each floor. Windows seem ever-present, especially in the atrium – the transparent corridor that connects the cancer and genetics wings.

At 280,000 square feet, it is the largest research building on campus. Larger still are hopes that it will help position UF at the forefront of health and life science research.

“This is a terrific building,” said UF Genetics Institute Director Kenneth Berns, MD, PhD “It actually works. People like it. They can function and they feel comfortable – they can work here. It is performing above the level of expectation. “We’re bringing together all kinds of scientists who work on plants and animals and people,” he said. “Between the two sides of the building, we’re going to have about 60 to 70 faculty. It will be an incredible aggregation of intellectual firepower.”

Final safety inspections were conducted in June. An “official” opening is slated for Nov. 15, coinciding with a meeting in Gainesville of Bioflorida, Florida’s independent statewide bioscience organization. But scientists have already made themselves at home.

“What’s important is the quality of the space,” said Maureen Goodenow, PhD, the Stephany W. Holloway university chair in AIDS research and co-director of experimental pathology in the medical school’s department of pathology, immunology and laboratory medicine. “New isn’t always better if the space is not well organized. The structure of these labs recognizes concepts of how labs function and what makes science evolve. It’s easy to move here, to expand and contract. The physical layout is very seamless.”

The utility and ambience are expensive. The price tag on the Cancer and Genetics Research Complex is $84 million. Given rising construction costs, the same building today would cost more than $100 million, according to the UF Facilities Planning and Construction Division.

But it’s an essential investment if UF is to generate a high level of NIH grants and recruit top-notch scientists, officials say. And returns are already evident.

“That building was completely necessary for our recruitment of Arun Srivastava and Roland Herzog of the new division of cell and molecular therapy,” said Dr. Terence Flotte, chairman of the department of pediatrics and former director of the UF Genetics Institute. “I created the division within pediatrics to widen the pipeline to develop more potential gene therapy agents for clinical applications. I mention Arun and Roland because they were multiply NIH-funded, big catches from other institutions, and we never would have gotten them here without this building. But we actually now have seven faculty in that division and they’ve got about $2.5 million a year in direct-cost NIH funding.”

Projects such as the Research Complex are part of a growing trend on the nation’s academic campuses. Last year, Oregon Health and Science University opened a $113 million, 274,000-square-foot Biomedical Research Building to boost its new research recruitment and expansion efforts. Similarly, Arizona State University spent $74 million on its Biodesign Institute, and The University of Chicago spent $200 million on its Center for Integrative Science. A bright and airy entrance to the UF Cancer and Genetics Research Complex provides a transparent corridor that connects the cancer and genetics wing. The 280,000-square-foot structure will provide an environment to help scientists position UF at the forefront of health and life science research.

In all, academic institutions reported an investment of at least $7.6 billion for the construction of new research space between 2002 and 2003, according to the National Science Foundation. That buys about 16 million net square feet of space, of which 56 percent will be used for research in biological and medical sciences. Add engineering research space, and these three fields account for about 70 percent of the new construction.

But what may make UF’s effort unique is the inclusion of genetics researchers and biostatisticians from throughout campus, including the Health Science Center colleges, the Institute of Food and Agricultural Sciences and the College of Liberal Arts and Sciences. Pairing them with cancer researchers – cancer in many ways being a genetic disease – is expected to create a charged research atmosphere.

“We didn’t want to build a building and carve it up with separations between very different entities,” Flotte said. “That really would have defeated the purpose of creating a multidisciplinary unit.”

The idea for a genetics institute began gathering momentum in 1997 when UF scientists were immersed in genes, working in highly specialized subsets of agriculture, medicine, botany and other disciplines. What was lacking was a mechanism to align genetic scientists at IFAS, CLAS, the Health Science Center colleges and beyond.

“In the beginning we pushed forward against a certain amount of skepticism about this notion of a university-wide institute,” Berns said. “But what we research all has DNA. It all operates on the universal genetic code. It all has recombination. It made sense. Eventually people from different parts of the university saw what we were doing as a positive thing.”

At the same time the university was sharpening its efforts to become nationally competitive in cancer research, Berns said. A research building was deemed essential. And because cancer is a process that involves the interaction between genes and their environment, it was becoming increasingly apparent that cancer and genetics researchers were natural allies.

UF researchers are well-versed at developing ideas in test tubes and experimenting with concepts that might lead to new drugs or therapies. Then they test the concept in animal models.

To move discoveries from the bench to the bedside is the next hurdle that blocks most scientists, according to Johannes Vieweg, MD, the founding chair of the College of Medicine’s new department of urology. He was recruited from Duke University in part because of his track record in moving experimental therapies into human trials

“There is an unmet need to accelerate the drug-discovery process so that our patients get the benefit of new and better treatments,” said Vieweg, who recently led the first study of a new vaccine that uses a patient’s own cells to slow prostate cancer growth. “At UF we have recognized that we can overcome this obstacle by attracting physicians and scientists who understand the scientific principle, but who at the same time can move the concept into the patient.”

Vieweg points to four thick notebooks stuffed with documents – just a sampling of the paperwork necessary to satisfy requirements for what he termed a small clinical trial.

“You have to do a lot of work to assure patient safety,” Vieweg said. “You need regulatory expertise, you need to understand the basic science, and you have to know about clinical trials and clinical trial design to prove your hypothesis. Then you need to have manufacturing capabilities to produce the vaccine or drug within your own four walls, and that’s very difficult because regulations mandate new drugs or therapeutics be produced at a safe and high standard that you cannot reach with a traditional laboratory.”

Such a high level of work requires a Good Manufacturing Practices laboratory, or GMP lab. Located in the Cancer Center wing, the GMP lab’s ventilation system is uniquely designed so air flows outward – nothing airborne enters to contaminate materials. What’s more, every agent, product, work area and procedure must stand up to rigorous certifications. Production personnel must be trained and certified, and those certifications are continually reviewed.

“The bottom line is you take an idea that has been worked out by basic scientists and do the work to fit it into a clinical context,” Vieweg said. “That requires a new type of laboratory that is quite expensive. But in this environment we will be able to focus on creating new drugs or new therapeutic approaches that are uniquely specific and avoid side effects seen with treatments such as chemotherapy or radiation therapy.”

The Research Complex also contains a Biosafety Level 3, or BSL3 lab, which Goodenow and her colleagues will use to focus on ways to treat or prevent HIV infection.

“Although HIV is not airborne, when you work with viruses or organisms that cause disease, BSL 3 conditions are required,” Goodenow said. “Air flows from the outside into the lab, but it isn’t exhausted until it is treated and filtered. So nothing gets out. It’s the opposite of a GMP lab.”

A touch of fortune

But locked-down labs aren’t the Research Complex’s claim to fame. Unlike conventional research space, which often consists of long corridors punctuated by doorways into rooms, the Cancer and Genetics Research Complex contains modules-rows of lab benches and common work areas, but relatively few walls. With no “next door” to speak of, there are no scientists down the hall-they’re already there. 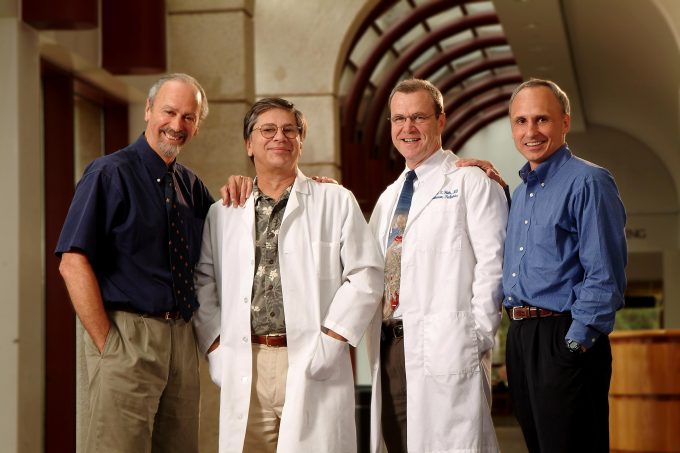 “The people who designed this building did so to maximize cross-fertilization of different groups,” said Stephen Sugrue, PhD, associate director of basic science for the Cancer Center and chairman of the College of Medicine’s department of anatomy and cell biology. “The idea is to put people next to each other who aren’t identical in their approaches, but who have the same goals.”

Likewise, the lounges and other common areas are meant to get researchers to rub shoulders with one another.

Also important in the scientific mix is the inclusion of the Interdisciplinary Center for Biotechnology Research, or ICBR, on the first floor of the cancer research wing-providing scientists with access to state-of-the-art instrumentation, training and expertise. The idea is, with the industrial-scale genome-sequencing, genetic analyses and other core services of the ICBR at arm’s length, synergies will explode.

From lab bench to bedside

While advances are made every day, the researchers are motivated to work even harder to find cures to the diseases afflicting so many. The new, large and expensive Research Complex has helped to energize their efforts, providing a user-friendly environment with many more opportunities for collaboration.

But the older, less-conspicuous building just across the street offers the inspiration.

Patients move in and out of the Judith S. and Jerry W. Davis Cancer Center every day, in sight of many of the scientists’ windows. It’s a continual reminder that the discoveries they’re working on must be adaptable for clinical use. And a reminder of why they are there.

Peter Katona, MD '77, is an associate professor at UCLA and an expert in bioterrorism and infectious diseases.
By Mark Davis