When reporters at the Gainesville Sun learned that Wayne Huizenga’s private jet had landed at the Gainesville airport one March morning, the newsroom scrambled to get the story. Was the Miami Dolphins owner in town to lure Gators football coach Urban Meyer to the NFL? 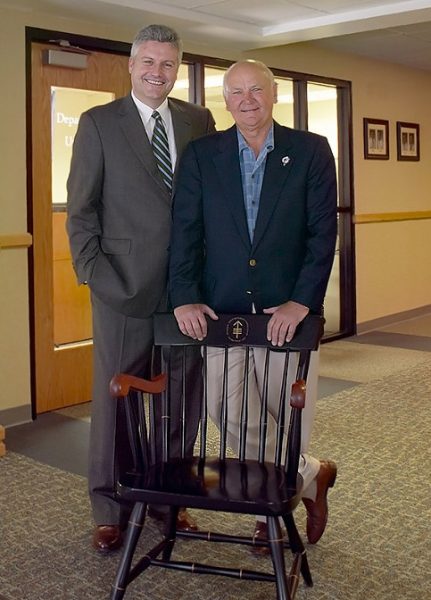 Johannes Vieweg (left) professor and founding chairman of the department of urology at the College of Medicine with Wayne Huizenga.

No. It wasn’t one of the country’s hottest college coaches or even a Heisman Trophy quarterback that brought Huizenga to the University of Florida. It was an old friend and trusted physician, Johannes Vieweg, professor and founding chairman of the department of urology at the College of Medicine. The two have been friends for nearly 15 years, and now that relationship could lead to a brighter future for men in Florida and across the country who are diagnosed with prostate cancer.

Late last year, Huizenga and his wife established the Wayne and Marti Huizenga Eminent Scholar Chair in Urologic Research with a $2 million gift to support Vieweg’s research efforts into biological therapies for prostate cancer – therapies Huizenga himself played a role in developing.

As one of the many patients whom Vieweg has treated, Huizenga is also one of Vieweg’s first patients to test experimental treatments for prostate cancer.

“I truly believe that the treatment Wayne received is responsible for keeping his cancer under control,” Vieweg said. “That is our goal – not just for Wayne but for other Floridians – to bring to the community new therapies that save lives and also preserve the quality of life for the patients.”

Huizenga, a South Florida businessman who grew Waste Management Inc. into a Fortune 500 company from a single garbage truck in 1968, was diagnosed with prostate cancer in 1990 and traveled from Fort Lauderdale to Duke University for treatment. That was where he first met Vieweg, a urology resident who was just beginning to make a name for himself in prostate cancer research.

“It was 1995 and my surgeon, David Paulson, kept bragging about Johannes,” Huizenga recalled. “Dr. Paulson told me he was something special and that the research he was doing was just first-rate. It wasn’t long after that I started contributing to Duke every year because of Johannes. Now he’s at UF and I want to help him here.”

Huizenga explained that he and his wife of 36 years each is a cancer survivor, and they believe their role in the fight against the disease is to help drive the research toward better treatment.

“Research is what it’s all about,” Huizenga said from Vieweg’s office on the second floor of the Medical Science Building. “I’m very happy to put some of my hard-earned dollars with Johannes to help him with his program and what he’s been doing.”

Vieweg continues to develop early clinical testing to investigate a new form of targeted therapies, including a new vaccine that uses the patients’ own dendritic cells to slow prostate cancer growth. The vaccine is intended for patients who have not responded to standard treatments.

“We can provide therapies that are not available in the commercial sector,” Vieweg explained. “Not all things we are doing work, but some of the approaches, for example the therapies Wayne received, we hope will soon be on the market for all.”

While Huizenga has no symptoms of his prostate cancer, he continues his routine flights from Fort Lauderdale to Gainesville.

“I’m under the watchful eye of Dr. Vieweg,” he said. “Why take chances?”