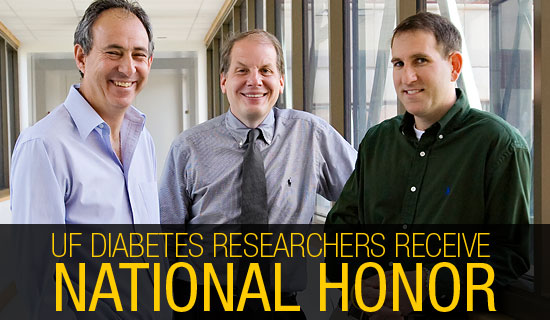 There isn’t a way to prevent or cure diabetes – yet. But that doesn’t stop UF researchers from combining forces to discover therapies to treat the disease, a team effort that has recently drawn national recognition from the Juvenile Diabetes Research Foundation International.

The foundation honored UF researchers Desmond Schatz, MD, Michael Haller, MD2000, and Mark Atkinson, PhD88, on June 13 with the Mary Tyler Moore and S. Robert Levine, MD, Excellence in Clinical Research Award at its annual meeting in Washington, D.C. Honorees are selected for their dedication and success in converting clinical diabetes discoveries into treatments for patients at the bedside.

“It’s very nice to be honored for the work we do because it doesn’t always get recognition in the public eye,” says Haller. “In reality, this award goes to everyone in our research labs as well as the patients who try to help us test new treatments. The real reward will be when we can develop something that can reverse or prevent people from getting type 1 diabetes.”

According to the foundation, the researchers were selected, as a team, for their innovative contributions to the diabetes community, more specifically their research in the preservation and restoration of pancreatic beta cells.

“Their willingness to challenge conventional wisdom and consequent ground-breaking work in translating novel scientific insights into new, potentially life-changing therapies and cures represents the sort of leadership we value most,” said JDRF Chair Mary Tyler Moore and S. Robert Levine, MD, in a joint statement.
It’s the trio’s collective passion and desire to collaborate with each other that helps spur their success, says Schatz, medical director of the UF Diabetes Center for Excellence who has worked with Atkinson for more than 20 years.

“There is no ego involved with us,” he says. “We’re joined at the hip and I think that’s what made our direction so successful and that’s the warmth and passion recognized by the (Juvenile Diabetes Research Foundation).”

Around-the-clock collaboration is the norm for this team. Not even weeknights or weekends are off– limits for phone calls. Schatz says there is never a day when the three researchers are not in and out of each other’s offices, discussing clinical trials or resolving differences of opinion in a positive way.

It’s that creative flow of ideas that has helped the team make advances in their broad range of clinical studies, from genetic testing that may help determine an infant’s risk of developing the disease to umbilical cord blood infusion therapies where insulin production was shown to be preserved in some children newly diagnosed with diabetes.

“Creativity brings cures, and this approach helps bridge the gap from the research bench to the patient’s bedside,” says Atkinson, who won the award individually in 2004.

All three researchers agree that the prestige and attention surrounding the award will help promote the work they’ve been doing for decades.