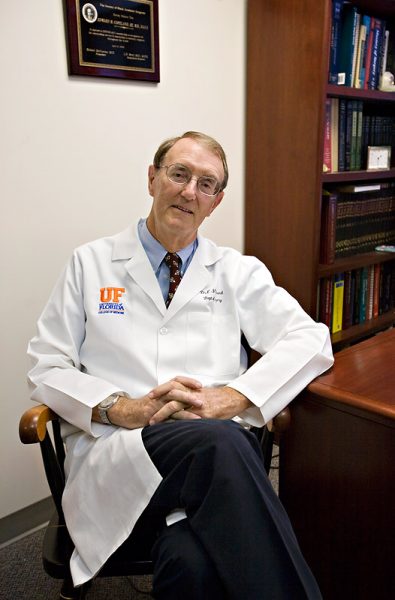 Edward M. Copeland III, MD, the Edward R. Woodward distinguished professor of surgery, was honored with a Lifetime Achievement Award for his dedication to surgical care throughout his 25-year career at UF.

“You’re often never king or queen in your own castle,” Copeland said. “For your own institution to honor you is truly the greatest honor you can receive.”

Copeland’s career in Gainesville began in 1982 when he was named professor and chairman of the department of surgery.

Through the years, Copeland watched once-fledgling surgical programs evolve into world-class centers for medical care. When he came to UF, the only transplant services offered at the hospital were for kidneys. Today, he said the program has expanded to include transplants for almost any organ in the body.

Throughout his career, Copeland gained recognition for his contributions to advances in breast cancer surgery and treatment. Copeland said training residents and serving as interim dean in 1996 were among his most satisfying experiences. He was also director of the UF Shands Cancer Center and president of UF Physicians, and this year served as the president of the American College of Surgeons.

“My legacy is in the people I influenced during their formative years,” he said. “More than anything, I’ll miss patient contact. My personality is such that I thought I did a good job of helping people through difficult times in their lives.”

Kenneth Heilman, MD, receives a lifetime achievement award from the College of Medicine.