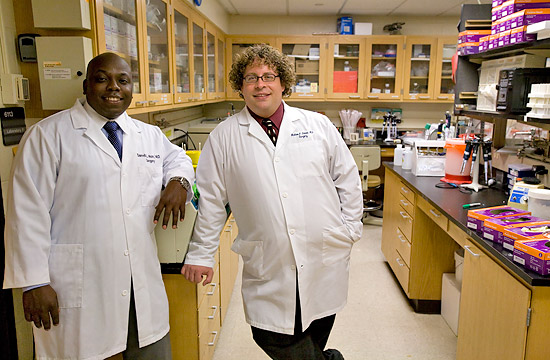 Taking research training of its surgical residents to the next level, the UF department of surgery encourages the pursuit of an additional doctorate degree, and as a result, this year, two general surgery residents, Matthew J. Delano, MD, PhD08, and Darrell L. Hunt, MD, PhD08, added another degree to their title — PhD.

Lyle L. Moldawer, PhD, professor and vice chairman of research for the department of surgery, said the UF program, which is offered in conjunction with the college’s Interdisciplinary Program in Biomedical Sciences, is unique for a couple of reasons. Through the program surgical residents take at least three years off from their general surgery residency training to focus on research.

“We believe that a combined knowledge of the scientific method and surgery makes a better surgeon, and also trains a small and unique cadre who are capable of translating research from the bench to the bedside, and moving the field forward,” Moldawer said. “These will be the future academic leaders in surgery.”

Delano successfully defended his dissertation in March and graduated in May. His research focuses on inflammation’s role in the development of sepsis. He plans to pursue a career in trauma or cardiothoracic surgery and said he specifically likes the idea of practicing medicine and actually trying to do research that solves some of the problems one sees in clinic.

Hunt successfully defended his dissertation in May and officially graduated in August. His research centers on breast cancer and what makes cells grow out of control and metastasize. As far as his interest in science and medicine, Hunt says he feels his purpose is to help people maximize their potential and that this cannot be done in the setting of disease.

Support for the training of these surgical residents as scientists comes from the National Institute of General Medical Sciences’ Ruth L. Kirschstein and the National Cancer Institute’s National Research Service Award training grants.

General surgery residency program director and interim chair of surgery Kevin E. Behrns, M.D., said it is quite an honor that the department has two National Institutes of Health research training awards through the research laboratories.

Edward M. Copeland III, MD was honored with a Lifetime Achievement Award for his 25 years at UF.