A few years have passed, but Peter Katona, MD77, would like to set the record straight. He has nothing against duct tape. Or plastic sheeting, for that matter.

In February 2003, the newly created Department of Homeland Security urged Americans to prepare for bioterrorism by laying in supplies of duct tape and plastic, sending Americans, particularly New Yorkers, into a buying frenzy.

“I did an interview with ABC World News about how ridiculous that was,” says Katona, associate professor at UCLA and expert in bioterrorism and infectious diseases. “The next day, The Daily Show picked it up. Jon Stewart showed the ABC clip of me, and asked, ‘Why is Dr. Katona so against duct tape and plastic? Maybe it has something to do with this photo we found!’ and they showed a hardware store with my name on it that was selling a competing product.”

Katona laughs about his moment in the comedy spotlight, but the incident perfectly illuminates his more serious professional passions for examining those areas where public policy, defense strategies, health care, information dissemination and public funding intersect.

“It’s been an evolving path,” says Katona, who majored in government at Cornell University before studying at the College of Medicine at UF, then working at the Center for Disease Control. “I’ve always been interested in infectious diseases as well as public health. I got my first micro-computer in 1980 because I was very interested in how you manipulate and utilize data. Then in the late 1990s I got very interested in biological agents that could be used as weapons. Interest in that area exploded after the anthrax letters.”

As he points out in the first chapter of his book, Countering Terrorism and WMD (Routledge, 2006), bioterrorism has a long and tragic history, from Hannibal tossing pots filled with poisonous snakes onto enemy ships to British General Jeffrey Amherst distributing small pox-tainted blankets to Native Americans.

“Those things were done on a relatively small scale,” Katona says. “We now have the ability to do this on a much larger level, provided the dominoes all fall in the right place. The Russians have made anthrax resistant to all antibiotics, for example. If that strain were to fall into the hands of the wrong people and released properly, we could be talking about hundreds of thousands of deaths.”

In the past, he says, even terrorists had constraints as to how far they would go, weighing the need to keep popular support. “But now with jihadi terrorism, those constraints seem to have been taken away. If they had the means to do things on a very large scale, they would do them. The scale and the potential at which bioterrorism can be used is new. I don’t see that happening in the near future, but I do worry about that happening at some point.”

That is why Katona explores solutions focused on knowledge and prevention, not fear and hysteria. In addition to his research at UCLA and his private practice, Katona is affiliated with the National Center for Biomedical Research and Training and the Academy of Counter-Terrorism Education at Louisiana State University, as well as the Los Angeles County Emergency Medical Services Agency. He is a frequent speaker at meetings and conferences, including the Milken Institute Global Conference, one of the largest and most prestigious economics meetings in the world.

“My theme has always been a global, multidisciplinary networked approach,” he explains. “The way we do things, the hierarchies, the bureaucracies that dictate policy in these areas, are old and haven’t been adapted well.”

As evidence, he points to the recent past. For instance, despite the large amounts of money spent on intelligence, at the time the U.S. Embassy in Tehran fell, the intelligence service employed just five Farsi speakers. Later, the U.S. entirely failed to foresee the fall of the Soviet Union.

“We spend a disproportionate amount of money militarily as opposed to diplomatically,” Katona says. “That shows where our priorities are, and I don’t think terrorism is a militarily winnable issue. The military has a role, for sure, and I do work for the military; I have great respect for the military. But solution involves understanding, education, political discussions as well as military intervention.”

He addresses those issues at great length in his next book, Global Biosecurity: Threats and Responses (Routledge) to be published later this year. Katona says that his interests have evolved naturally over time to include much broader issues.

“I have a great interest in health care and how health care is handled, both nationally and internationally,” he says. “What has gone wrong with our health-care system? What are the things that could wreck the system? And what can we do about it?”

Katona’s deep concern for global issues has become a family trait. His older daughter studied public policy at UC Berkeley, landed a CORO fellowship and now, at 24, is deputy to a county supervisor. His younger daughter, also a CORO fellow, and his son have been active in founding Darfur awareness programs and in supporting Seeds of Peace, a summer camp for children from war-torn countries. 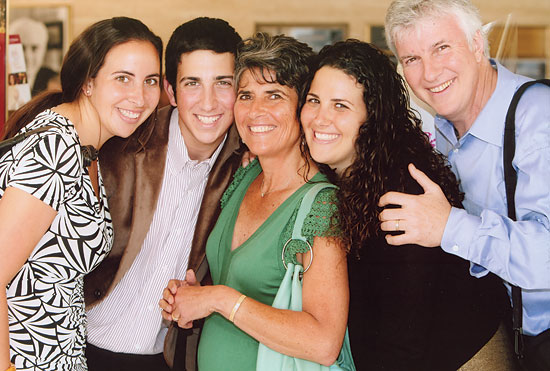 Peter Katona, MD77, with his family. From left are his oldest daughter, Karly; his son, Joey; his wife, Dorothy; and his youngest daughter, Lindsay.

Of all his accomplishments, he says he is most proud of his children. “Though my wife is probably more responsible than I,” he adds. “I am honored and lucky that she agreed to marry me. We are a great team.”

When he was 5, Katona escaped with his family from Budapest during the Hungarian Revolution. He says that he sees his work in public health policy as a way of giving back.

“I came to the states as an immigrant and I’ve always felt that I owe a great deal to the United States, having accepted my family as immigrants. I think this is a great place, it’s open to people coming from other cultures.”

He adds that he also is deeply grateful to UF. “I definitely feel most indebted to Florida for helping me explore my interests. UF provided me with the most important basis for my education and subsequent accomplishments.

“And they took a chance by accepting me,” he adds with a smile.

The owner of the Miami Dolphins starts the Wayne and Marti Huizenga Eminent Scholar Chair in Urologic Research.